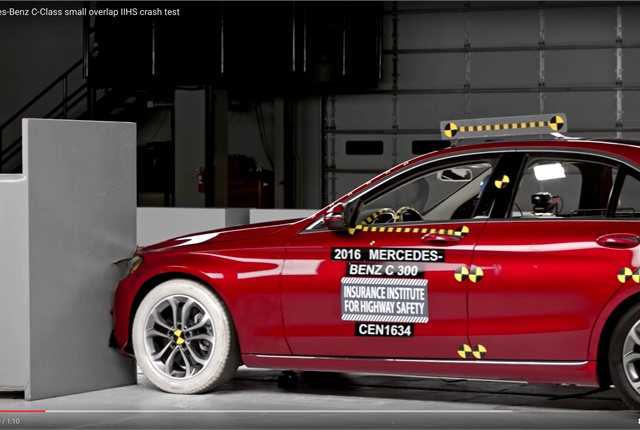 The 2016-model year Mercedes-Benz C-Class is the latest winner of the Insurance Institute for Highway Safety’s Top Safety Pick+ award.

The mid-size luxury car earned the highest possible rating of “good” in all five of the institute’s crashworthiness evaluations — small overlap front, moderate overlap front, side, roof strength, and head restraints, IIHS reported. (To view video footage of the small overlap front crash test, click on the photo or link below the headline.)

Although the C-Class was redesigned for 2015, IIHS only recently evaluated it for crashworthiness.

“In the challenging small overlap test, the car’s structure held up well with maximum intrusion into the occupant compartment of 4 inches.” IIHS said in a released statement. “That was a big improvement over the earlier generation of the C-Class, which had intrusion of 20 inches at the footrest and earned a marginal rating.”

Also notable are the results of the roof strength test. The C-Class was found to have a strength-to-weight ratio of seven, among the highest ever registered, IIHS said. A ratio of four or higher is required for a “good” rating. Roof strength is important for protection in a rollover crash.

To qualify for a 2016 Top Safety Pick+ award, a vehicle must earn “good” ratings in the five IIHS crashworthiness tests and an “advanced” or “superior” rating for front crash prevention.