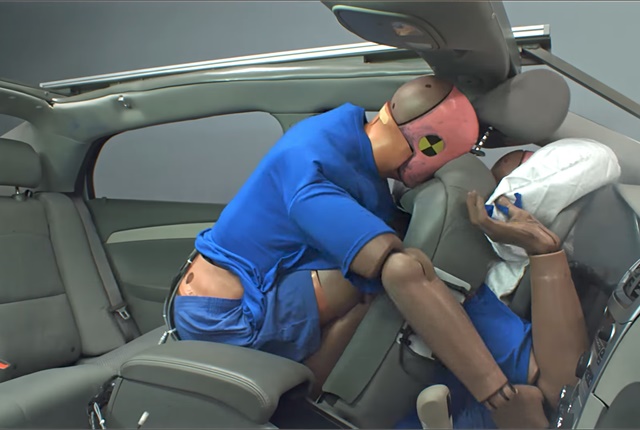 The Insurance Institute for Highway Safety recently conducted a test to find out what happens when a back-seat passenger is unbuckled during a crash. To learn about the test results, click on the video link below.

VIDEO: Buckling Up in Back

“Is everyone buckled up?”

It’s a good idea for fleet drivers to make this simple question a permanent part of their pre-trip routine whenever they have passengers. Unfortunately, some adults neglect to wear safety belts on every trip, especially when they’re riding in the back seat.

Last year, the Insurance Institute for Highway Safety conducted a seat-belt use survey between June and August. Of the 1,172 respondents who had been a rear passenger during the previous six months, 72% said they always buckle their seat belt in the back seat. In contrast, 91% said they always use their seat belt when seated in the front. That’s a noteworthy difference.

What many drivers don’t realize is that one passenger’s decision to ditch the seat belt can have consequences for other people in the vehicle. A 2013 study from the University of Virginia found that drivers are about twice as likely to suffer fatal injuries in a crash when the left rear passenger is unrestrained compared to when that passenger is wearing a seat belt.

“In the rear seat a lap/shoulder belt is the primary means of protection in a frontal crash,” said Jessica Jermakian, an IIHS senior research engineer who served as co-author of the study. “Without it, bodies can hit hard surfaces or other people at full speed, leading to serious injuries.”

Adults 35 to 54 years old are at a greater risk for neglecting to buckle up, according to the IIHS study. A total of 66% of the adults in this group reported always using a belt in back, compared with 76% of adults 55 and older and 73% of adults 18 to 34.

Nearly 40% of people surveyed said they sometimes don’t wear a seat belt in the back seat because there’s no law requiring it.

But 75% of those who don’t always wear a seat belt in the back said they would be more likely to wear one if someone in the car reminded them to do so. Moreover, nearly two-thirds of part-time seat belt users and nonusers acknowledged that audible rear-seat reminders would make them more likely to buckle up.

In 2015, safety belts saved an estimated 13,941 lives. And if everyone buckled up, an additional 2,800 deaths could have been prevented, according to the National Highway Traffic Safety Administration.

More than half of the people who die in passenger vehicle crashes in the U.S. each year are not wearing a seat belt.