The 2009 Mazda6 is redefining the mid-size car market, according to the automaker. The Mazda6 combines attractive styling with driving performance and substantially enhanced environmental and safety features.

One company currently deploying the Mazda6 in its fleet is Boehringer-Ingelheim. Since last August, Lee Miller, manager, fleet services, has included 250 Mazda6 models in her 3,700-unit fleet.

"It is great to have a new, 'edgy' U.S.-built import vehicle," said Miller. "Order-to-delivery time is reasonable, and the manufacturer has been super to work with. Mazda has stepped up to the plate to partner with leasing companies as well as their clients to ensure all the logistics are in place to be a true fleet option."

Features Enhance Ease of Use

Firing up with the touch of a button, the Mazda6 comes ready to "Zoom-Zoom." A 2.5L DOHC four-cylinder engine with VVT is standard, producing 170 hp @ 6,000 rpm and 167 lb.-ft. of torque, and achieving an EPA-estimated 21/30 city/highway mpg. An advanced, 6-speed Sport automatic transmission (AT) is standard in Mazda6 S models, with a 5-speed Sport AT available on Mazda6 I models. The Mazda6 achieves 21 mpg city and 30 mpg highway.

Mazda's 34-step airless painting process and 800 inspections prior to sale testify to the automaker's pursuit of perfection in each vehicle as it leaves the assembly line.

Xenon headlights are available on the Grand Touring edition and project two to three times the light, last three to five times longer, and use 30-40 percent less energy than halogen lights, according to Mazda. 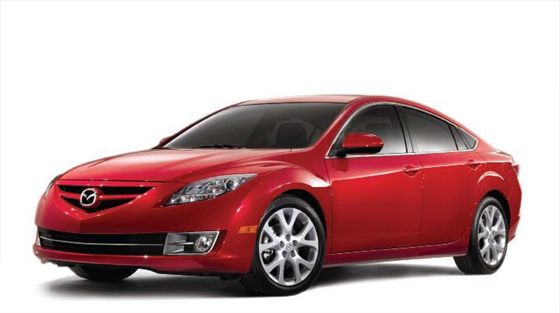 Mazda's Blind Spot Monitoring System is available on the Touring Plus and Grand Touring trims. A radar-based driver-warning system utilizes a pair of rear-facing sensors to detect vehicles and other objects that enter the driver's right and left blind spots. If the warning light is illuminated and a driver signals to change lanes, the warning light blinks and a warning chime sounds.