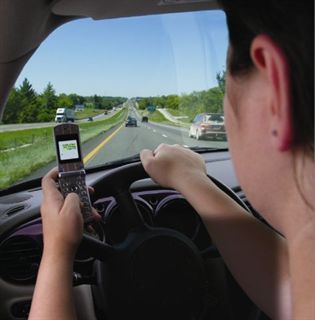 The sobering statistics are beginning to add up. Drivers distracted by using a cell phone while operating a vehicle cause at least 28 percent of all traffic crashes — 1.6 million crashes annually. Research has begun pinpointing the human brain's multitasking limitations when a driver is engaged in operating a vehicle. Now, the costs — financial and human — of cell phone- and texting-related crashes are prompting a growing number of companies to address this dangerous driving behavior.

National Safety Council (NSC) figures reveal 1.4 million crashes per year are precipitated by drivers using cell phones and a minimum 200,000 additional crashes are caused by drivers texting while behind the wheel. National Highway Traffic Safety Administration (NHTSA) 2008 data puts the number of people killed in crashes involving a distracted driver at nearly 6,000, with 500,000 more injured in such accidents.

Cell phone and texting constitute a percentage of distracted-driver behaviors, which also include eating and drinking, grooming, talking to passengers, reading (including maps), using a navigation system, watching a video, manipulating vehicle devices such as radios, mirrors, climate, etc.

A Nationwide Insurance poll revealed 81 percent of the public admitted to talking on a cell phone while driving. NHTSA estimates 12 percent of drivers at any point during the day are talking on cell phones while driving. The NSC cites New England Journal of Medicine research and an Insurance Institute for Highway Safety study in noting drivers who use cell phones are four times more likely to be involved in a crash.

Texting while driving involves all three distractions, requiring a texting driver to take his or her eyes, mind, and hands off the road for as long as five seconds, nearly the length of a football field when traveling at 60 mph.

According to a recent NSC white paper, "Understanding the Distracting Brain," the brain cannot safely perform the multitasking required to use a cell phone while operating a vehicle.

The financial costs of company driver-involved crashes are substantial. According to the latest available NHTSA data, including wage-risk, on-the-job highway crashes cost employers more than $24,500 per crash and more than $128,000 per injury. If a fatality occurs, the cost skyrockets to more than $3.8 million.

Of even greater financial concern are multimillion-dollar judgments against companies with on-the-job at-fault drivers.

At St. Louis-based Forest Pharmaceuticals, use of any electronic device by company drivers while their vehicles are in motion is prohibited, said Deb Burns, assistant manager, fleet services. A company cell phone policy was first written in 2003.

"This, of course, includes texting. Violators are given points in their driver profile. The accumulation of points could lead to further disciplinary action up to and including termination," Burns explained.

The total ban on all cell phone use is based on the company's independent research, according to Burns.

"We're convinced using a cell phone while driving is a mental, rather than mechanical, distraction," she said. "It's a distraction of the brain."

She admits policy enforcement is difficult, "because we have no way of tracking the use of these devices." She asks employees who telephone her office if they are calling while driving.

"I usually can tell when they're on a cell phone and driving, and I tell them I won't talk to them until they pull over and stop the vehicle."

Hewlett-Packard company drivers may not text while operating their vehicles and their cell phone use is limited to hands-free or Bluetooth-enabled communications, according to Jeff Hurrell, North American fleet manager.

Two industry surveys report corporate measures taken to reduce the risks of distracted driving. Of 2,004 NSC members responding to a 2009 survey, 58 percent said their organization had a cell phone policy. Of those, 99 percent said the policy did not affect productivity, and 20 percent saw decreases in employee crash rates and property damage.

The Council reported "half of companies currently prohibiting only handheld phones while driving report they are 'somewhat' to 'very likely' to upgrade their policies to include banning hands-free phones." Additionally, more than one-third of companies without any policy expect to implement one within the next 12 months.

In other industry research, a recent Network of Employers for Traffic Safety (NETS) survey of 24 leading companies revealed 74 percent either have policies in place or plan to implement policies banning use of all mobile devices while driving company vehicles. The rules apply to both hand-held and hands-free devices.

While all the companies surveyed ban hand-held mobile devices, prohibiting texting, most companies specifically address text messaging their policies. In many cases, policies apply whether the driver is operating a company-owned vehicle or is using a personal vehicle for company business.

An earlier NETS benchmarking study of companies with a combined 2008 U.S.-based fleet of 185,000 passenger vehicles found a total ban on mobile phone use was a common attribute of the companies with the best fleet safety performance. Participants in the survey included global leaders in the pharmaceutical, packaging, food and beverage, oil and gas, manufacturing, and insurance industries.

Legislation and regulation banning or prohibiting cell phone use and texting while driving is mounting at state and federal levels.

Federal employees have been banned from texting when using government-provided cars or cell phones and when using their own phones and cars to conduct government business. Earlier this year, the federal government enacted a ban on text messaging for drivers of all large commercial trucks and buses.

According to the U.S. Department of Transportation, nationwide, six states prohibit all drivers from using hand-held cell phones while driving, and 23 states have enacted texting bans.

A ban on hand-held devices has been enacted in:

A texting ban is on the books in:

A state-by-state list of cell phone and texting legislation is available at the Governors Highway Safety Information Web site.