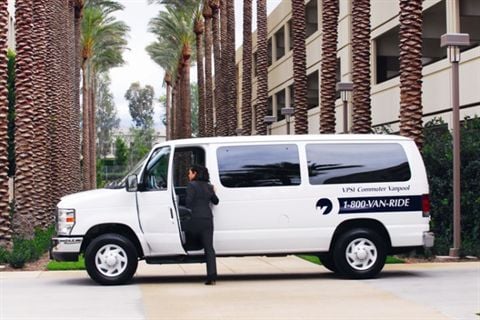 When it comes to making their businesses more environmentally friendly, most fleets aim to take vehicles off the road. For VPSI, a provider of vanpool services, it's quite the opposite: The more vans it puts on the road, the more it helps the environment. By encouraging drivers to commute using a shared van rather than personal vehicles, just one fleet unit can take up to 14 cars off the road per day. Likewise, in a single year, one 15-person passenger van can eliminate more than 330,000 commuter miles traveled, conserve more than 13,000 gallons of fuel, and reduce CO2 emissions by 136 tons - roughly the same CO2 emissions from 1.6 tanker trucks' worth of gasoline.

"Taking people out of their cars and putting them in vanpools is the ecologically right thing to do," said Steven "Peds" Pederson, vice president, fleet & risk management for VPSI. "Not only are our customers helping reduce congestion, they are no longer emitting pollutants into the atmosphere from their single occupant auto."

Headquartered in Troy, Mich., VPSI has been helping people commute via sustainable transportation solutions for more than 30 years. The company operates a fleet of more than 6,000 passenger vans and minivans from more than 40 offices nationwide and in Europe. Serving more than 55,000 daily commuters, it works to provide an environmentally friendly transportation option that saves commuters time and money.

"We operate basically only two vehicle products: large passenger vans and minivans. We specialize in that product area," Pederson said. "And, we have scale. We probably buy and operate more vehicles of that type than just about anyone. Our folks know these two vehicle types inside and out."

For the most part, VPSI's contracts are with employees, not employers. However, its riders are employed by a number of leading organizations around the world, including ChevronTexaco, Walt Disney, Intel, Hewlett-Packard, Compuware, Georgia Power, and Bank of America, as well as a number of other Fortune 500 companies, hospitals, and government organizations across the U.S.

While other transportation companies have struggled through the economic downturn, VPSI has added more than 2,000 vans over the past four years. This is due, in part, to commuters tightening their budgets and turning to vanpools as a cost-saving measure, according to VPSI.

"Our business seems to be spurred on by varied economic changes," Pederson said. "Increased fuel prices pinch the typical family's budgets and they look for economical alternatives to driving alone - like vanpooling. Tough economic times also put pressures on the family budget. Transportation typically will be one of the top three items in that budget. So, when squeezed, families will turn to other options, and vanpooling is a safe, comfortable, convenient, and economical alternative."

VPSI's success is also due to improvements in its operations. For instance, over the past six to seven years, it has driven down the cost of maintenance, repairs, and tires 40 percent. Mass purchasing power has helped, but a concerted effort from the top down to "scrub" the company's data and identify improvements is likely the main contributor to this success.

To perform this task, VPSI assembled a team to identify where money was and wasn't being spent correctly. After determining the anomalies in the company's expenditures, the team visited each location to determine their cause. This helped the team figure out what was functioning well and what needed to change.

For instance, through the study, the team learned that some models had front-end alignment and tire pressure issues upon arriving from the factory. This caused excessive - and costly - tire wear. However, vanpool drivers, who use coupon books as vouchers for preventive maintenance, didn't have a rotation scheduled until the second service at either 12,000 or 15,000 miles.

"Tires truly are where the rubber meets the road in terms of safety and maintenance and repair budgets," Pederson said. "We were going through OEM tires in the first 10,000-15,000 miles. We found they were delivering new vehicles with tire pressure and alignment issues, contributing to premature tire wear. As a result, we implemented an education program to try and correct problems before they hit the road, and we moved the inspection and rotation up to the first service to catch problems more quickly. These simple steps saved us a small fortune in tire replacement expense."

Overall, Pederson said VPSI's success is due to its processes and people. "We've relied on a very experienced and flexible workforce and time-tested systems and processes. Many of my colleagues can wear different hats at different times," he said. "One thing that makes VPSI unique is the family atmosphere of the company, combined with a management team that has been together, on average, for about 20 years. We love what we do, and that makes coming to work each day a real joy."

Unique to VPSI's history is its early connection with an OEM. Established in 1977 as Van Pool Services, Inc. (now VPSI), the company was formed as a subsidiary of Chrysler Corporation. Pederson said this shaped the way the business runs.

Growing as a subsidiary of Chrysler gave VPSI the luxury of expert mentorship from the manufacturer. This offered the company an inside look at the automotive business at a young age - one that would serve it well in the future. Under the wing of Chrysler, it operated under Chrysler's same systems and processes, resulting in an operation that ran more like a large, experienced business than the small, fledgling company it was.

"Our experience with Chrysler helped us develop big company processes and discipline without sacrificing our small company entrepreneurial spirit," Pederson said. "This has aided us in being an excellent supplier to government agencies and large private sector companies. We can deliver on our promises and provide the services and systems they might expect from a much larger company."

VPSI's relationship with Chrysler afforded it another advantage: Unlike other companies, VPSI doesn't need a bridge between its company and the manufacturer. Knowledge of manufacturing and the relationships the company built over the years have allowed it to work hand-in-hand with OEMs.

"Our Chrysler experience was very rewarding," Pederson said. "In the almost 20 years we were owned by Chrysler, we reported to, or were a part of, many different departments. We got to know many different executives who later rose through the ranks into many different areas within the corporation. We learned from their management styles, we gained better visibility within the organization, and we gained access to areas we would never have seen as an outsider looking in."

This has yielded an important business outcome for the company, as it now works directly with Ford via a ship-thru program to modify the interior seating arrangement for passenger vans. Because passenger comfort and safety are critical to the company's business model, this is an important partnership. Furthermore, these VPSI modifications are very low cost - just a fraction of the vehicle's overall price, according to Pederson.

"Our vehicles leave the assembly plant and go under an overpass into the modifier's plant for the installation of the special seating systems. They then go right back under the overpass and into the Ford transportation system," Pederson said. "The vehicles get delivered to the dealer of our choice near our branch locations. We do business from Alaska to Florida and from Maine to Hawaii, so participation in the ship-thru program is very important to us."

Ultimately, providing increased passenger comfort via the ship-thru program helps VPSI ensure rider satisfaction and recruit more riders to the vanpool cause. For example, in traditional passenger vans, a rider must walk through an aisle on the side of the van, negotiating a tangle of seatbelts and even crawling over the wheel well. VPSI vans are modified to create a center aisle, similar to an airplane. This makes it easier for passengers to enter and exit the vehicle. Other modifications include more comfortable seatbelts, reading lights, and additional air conditioning ducts.

Pederson said passenger comfort is integral to everything VPSI does. "Vehicles, to us, are our lifeblood. They are not just another tool for performing a sales- or service-related function in a large company. Without vanpool vehicles we are not in business," he said. "The modifications we make to our passenger vans set us apart from others. Providing a convenient, comfortable, and safe commuting environment within the vehicles is paramount to our success."

Customer satisfaction is highly important to VPSI. Unlike most fleets, its main competition is not a rival company, but rather personal transportation vehicles. Providing exceptional comfort and safety helps VPSI convince solo drivers vanpooling is a convenient, advantageous choice.