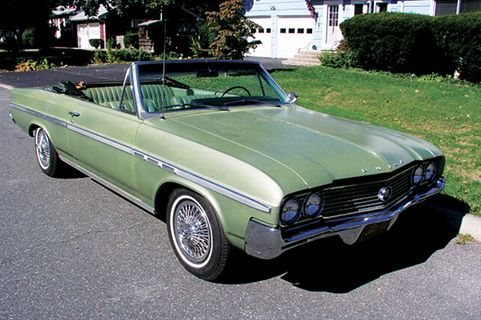 The Buick Skylark of the 1960s and early 1970s was the first non-Chevrolet, Ford, or Plymouth volume vehicle to significantly impact the fleet industry. It opened up the fleet business for other brands to participate. The Skylark also met with enough success that it started the trend away from full-size cars to intermediates. Vehicle selectors went from one to three choices to as many as seven or eight possibilities.
Engine: 225 CID V-6 @ 155 hp
MPG (city/highway): N/A 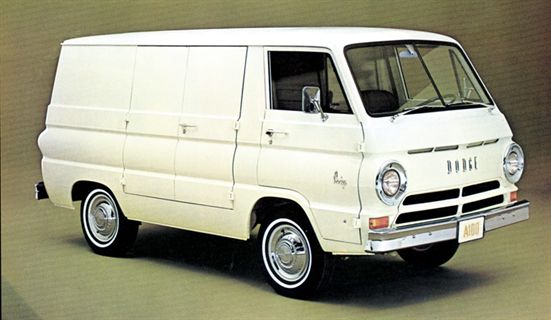 The A-100 line was a family of compact vans and trucks produced by Chrysler and sold under the Dodge brand through 1970. The van’s cab-forward design was unusual in passenger vehicles, and its totally flat cargo floor was capable of handling many types of payloads.
Engine: Six-cylinder @ 110 hp
MPG (city/highway): N/A 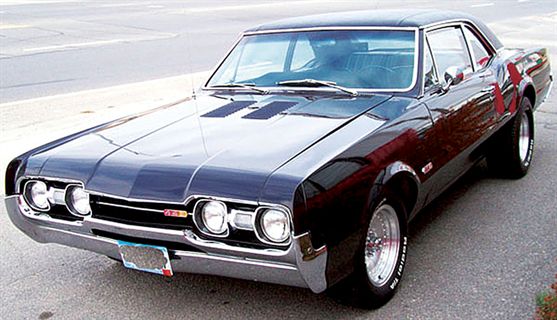 The Cutlass name appeared in 1966, the first year of GM’s new intermediate four-door hardtop sedan. For 1967, the Cutlass Supreme line was expanded into a full series that also included a two-door hard-top coupe, two-door pillared coupe, four-door pillared sedan, and a convertible. The Cutlass was a larger vehicle than its predecessors with more capability from a fleet perspective, according to GM.
Engine: 250 CID Inline 6 @ 155 hp
MPG (city/highway): N/A 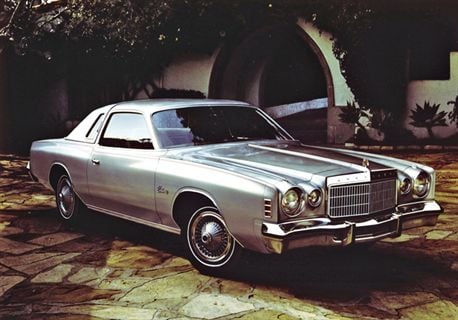 Rethinking its position after the first fuel crisis of 1973-'74 that crippled big-car sales, Chrysler created the Cordoba. This vehicle was Chrysler’s first entry into what was considered the “personal luxury car” group. The vehicle was a hit and remained in production
until 1983.
Engine: 5.2L V-8
MPG (city/highway): 22 (combined) 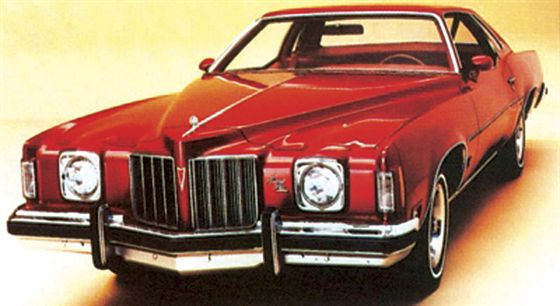 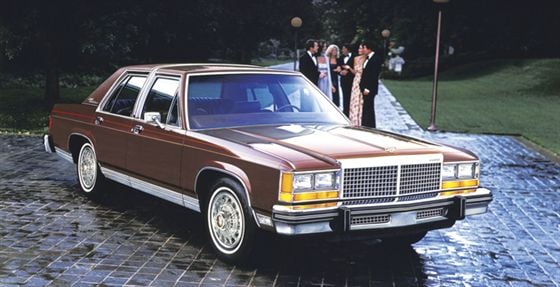 The Crown Victoria is an icon in two key business areas — police and taxi. These industries demand 24/7 capability, high quality, reliability, durability, and customer satisfaction. During its lifetime, the Crown Victoria was a dominant police vehicle in its segment until its production ceased in 2010.
Engine: 5.0L V-8
MPG (city/highway): 17 (combined) 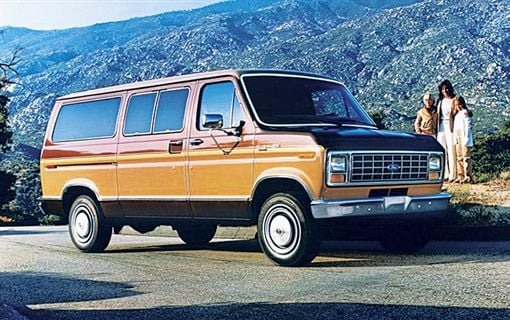 The Ford E-Series, formerly known as the Econoline or Club Wagon, is a line of full-size vans (both cargo and passenger) and truck chassis. The line was introduced in 1961 as a compact van and variations are still
in production today (in its fourth generation). According to the manufacturer, it has been America’s best-selling full-size van since the 1980s.
Engine: 300 CID I-6; 302 CID Windsor V-8; 351 CID Windsor V-8; 460 CID 385 V-8; 6.9L & 7.3L Navistar Diesel V-8
MPG (city/highway): N/A 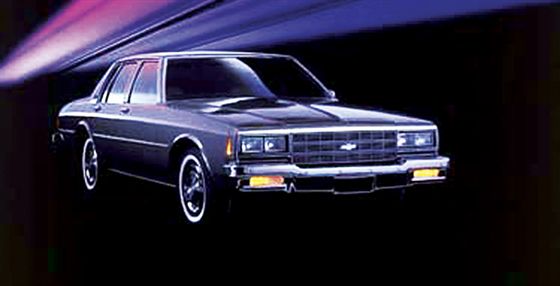 The full-size Impala was introduced for the 1958 model-year. Distinguishable for many years due its symmetrical triple taillights, the Impala continued as one of Chevrolet’s most popular full-size cars through the mid-1980s. The car was reintroduced for the 1994 model-year as the Impala SS, produced through 1996. Resurrected again for the 2000 model-year, the vehicle is currently in its ninth generation.
Engine: 3.8L V-6; 4.1L L6; and 5.7L V-8
MPG (city/highway): 12/17 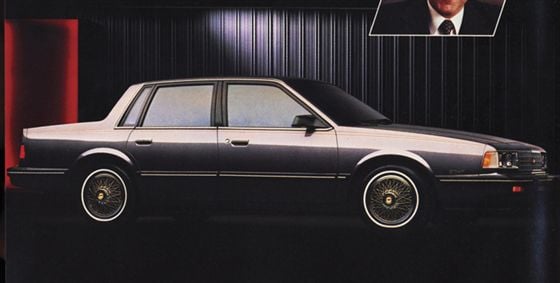 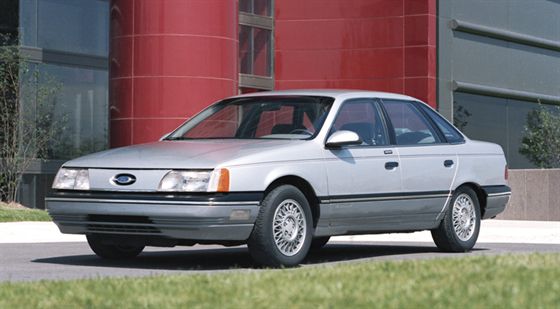 The Ford Taurus has been considered a dominant car in the fleet industry since its introduction, according to Ford. Providing a mix of package, performance, and styling, Taurus became an icon in the fleet industry.
Engine: 2.5L, four-cylinder @ 90 hp
MPG (city/highway): 18/24 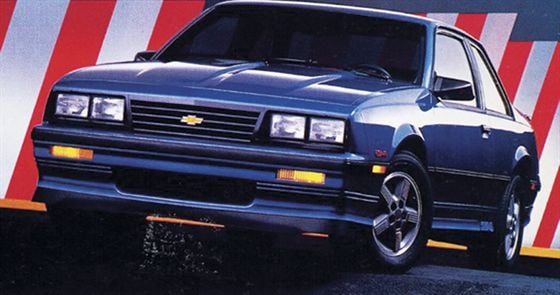 A compact car based on General Motors’ J Platform, the Cavalier was produced from 1982-2005 and repeatedly was named one of the best-selling cars in the U.S. The vehicle was first offered as a two- or four-door, hatchback, or station wagon. Produced for three generations, the car only received one complete redesign in 1995.
Engine: 1.8L I-4; 2.0L I-4; and 2.8L V-6
MPG (city/highway): 17/25 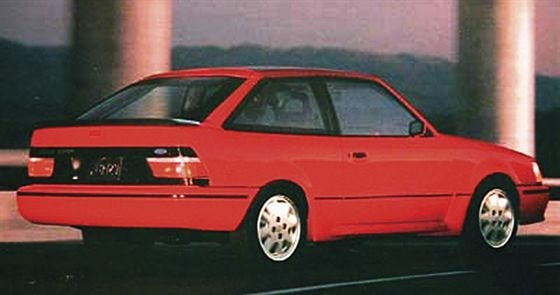 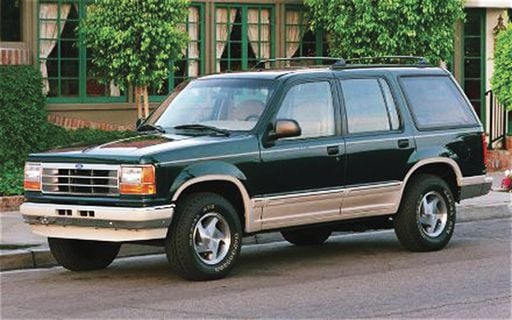 The Ford Explorer is credited with launching the growth of the sport/utility vehicle (SUV) segment, according to Ford. With its body-on-frame construction, payload capabilities, and ability to carry people and cargo, it provided a vehicle designed to meet a variety of fleet customer requirements.
Engine: 4.0L, V-6 @ 155 hp
MPG (city/highway): 16/21 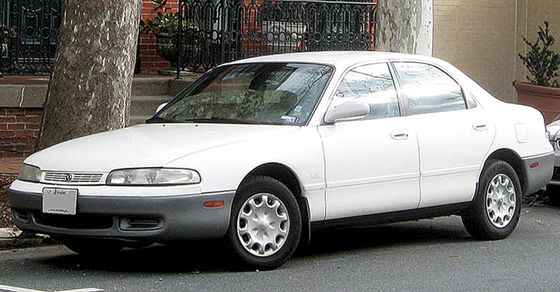 The first Mazda 626 appeared in most markets in 1979 as a rear-wheel drive compact. The coupe and sedan were mechanically identical with front MacPherson struts and a solid axle in back mounted on four links riding on coil springs. Either a five-speed manual or three-speed automatic transmission with recirculating ball steering was available.
Engine: 2.0L I-4 @ 118 hp; 2.5L V-6 @ 164 hp
MPG (city/highway): 18/26 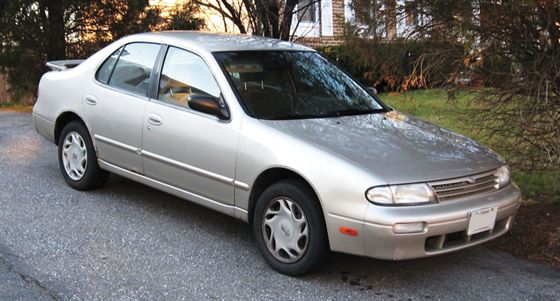 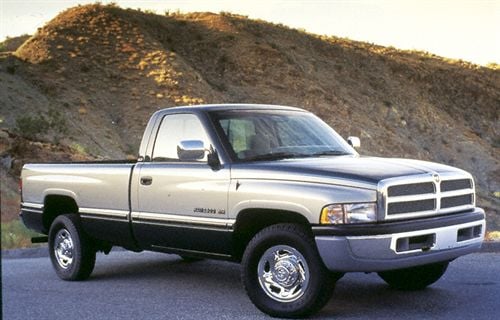 The Dodge Ram was redesigned for 1994 with front fenders separated from an oversize grille. Its design set the benchmark for light- and medium-duty vehicles. The Dodge Ram established new pickup standards for power, torque, and durability, according to the automaker. In 2010, the automaker created the “Ram” brand.
Engine: 3.9L, six-cylinder @ 175 hp
MPG (city/highway): 15/19 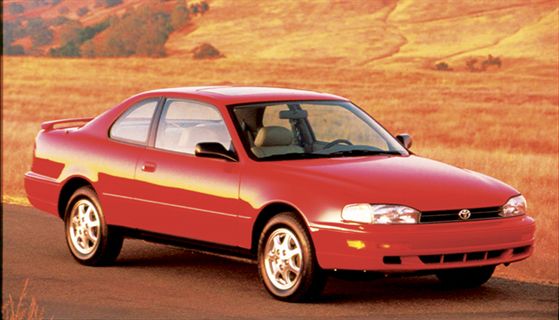 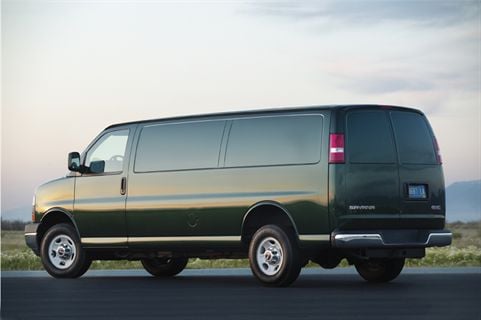 The Chevrolet Express and GMC Savana vans were the first GM entries into the full-size, full-frame van market. The cargo variety of the Express/Savana is popular as a work vehicle, often used by electricians, plumbers, and vocational fleets that must haul a variety of large items. The Express/Savana is often used as an ambulance or shuttle bus.
Engine: 5.7L
MPG (city/highway): 15/19 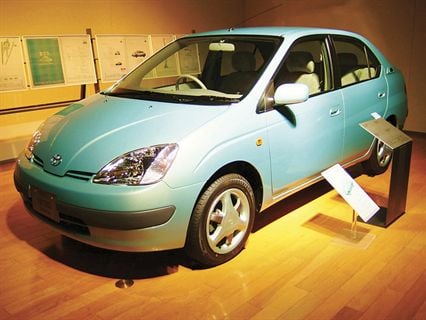 A fully hybrid-electric car, the Prius first went on sale in Japan, making it the first mass-produced hybrid vehicle. The vehicle launched in the U.S. in 2000 as a 2001 model-year vehicle and is currently in its third generation.
Engine: 1.5L DOHC I-4, 288v motor
MPG (city/highway): 50 (combined, third generation) 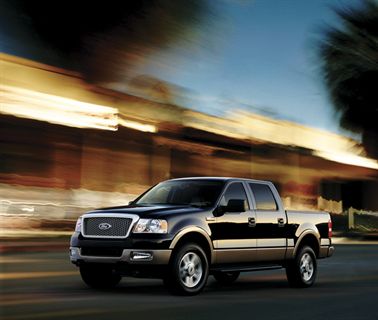 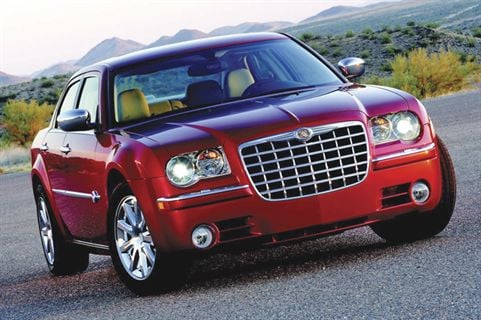 What was once considered a shortcoming of rear-wheel drive — poor traction in wet and snowy conditions — has been addressed by modern technology: Electronic Stability Program (ESP). The 2006 Chrysler 300 included ESP standard on all fleet vehicles to deliver safer, all-weather transportation in large, comfortable vehicles.
Engine: 2.7L V-6 @ 190 hp
MPG (city/highway): 21/28 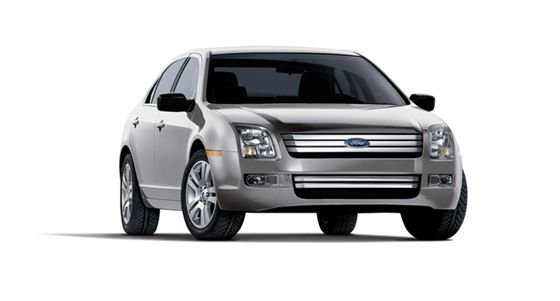 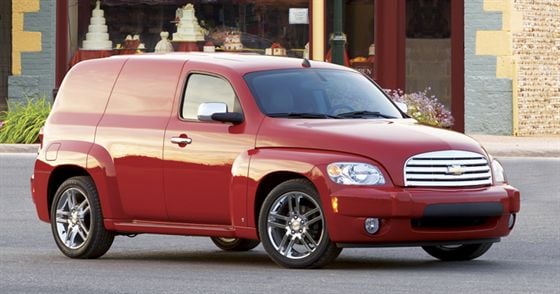 The 2007 HHR Panel was designed for a myriad of commercial uses and adds a new dimension of functionality. Building a panel van version of the retro wagon was the idea of GM commercial customers, who were introduced to the original HHR at a GM Fleet and Commercial product show.
Engine: Ecotec 2.2L
MPG (city/highway): 21/27 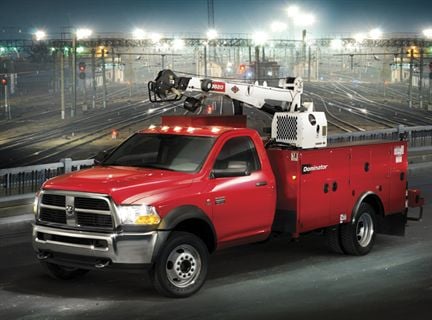 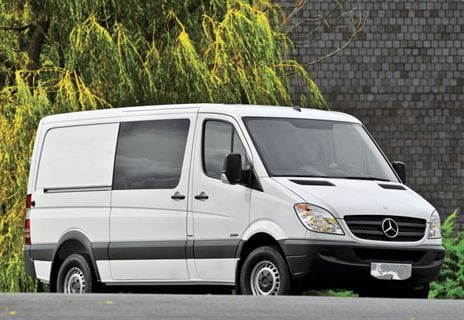 First introduced by Freightliner in 2001, the Sprinter quickly became one of the most versatile vans on the market. In 2010, Mercedes-Benz took over the Sprinter franchise, which now offers five models all powered by a 3.0L V-6 BlueTEC diesel engine.
Engine: 3.0L V-6 diesel
MPG (city/highway): 23/28 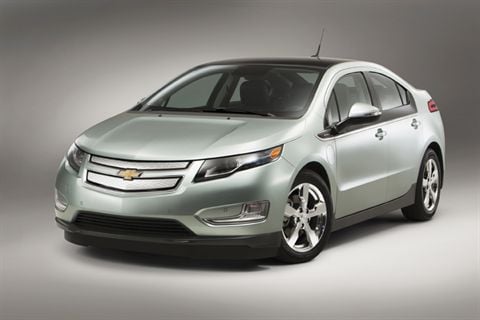 Introduced for the 2011 model-year, the Chevrolet Volt extended-range plug-in electric vehicle can operate between 25 and 50 miles on electric power, and up to 310 miles of extended range with an onboard 1.4L engine. According to the manufacturer, the Volt is the world’s first mass-produced plug-in electric vehicle with a range-extending engine.
Engine: 1.4L
MPG (city/highway): TBD