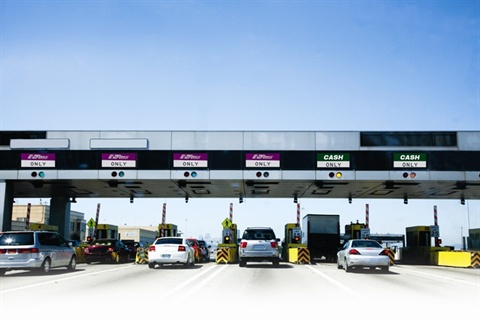 Vehicle violations represent 1-3 percent of total fleet costs and vary by fleet depending on the cities and states where vehicles operate. Sometimes driver violations are egregious. It is not uncommon for some drivers to incur as much as $6,000 in tickets on an annual basis. The cheapest ticket in New York City is $35, and if the ticket goes into default, the amount doubles until it caps out at $135. Some scofflaw drivers believe parking tickets are the cost of doing business, especially in New York City. Sometimes the cost of a ticket for double parking is less expensive than parking in a garage. Other times it is expedient because of the lack of parking. At the height of the workday, it is not uncommon to find garages filled. Another reason violations are on the radar screens of fleet managers is due to the aggressive enforcement by municipalities and other jurisdictions.

Violations have increased with red light and speed cameras being installed in many areas of the country.

"The municipalities are going to great lengths to enforce the payment of these violations. As a result, we have seen significantly more violations go into collection status and actually handed over to true collection agencies," said Eric Crooks, director of operations, license and title for LeasePlan USA.

There is an increased effort by jurisdictions to go after unpaid tickets, typically as far back as 10 years. "We are also seeing some municipalities starting to tie collection of past due violations to renewal of other vehicles in a client's fleet, business license renewal, collection of taxes, etc.," said Crooks.

Prompting this resurfacing of old tickets is that many states have combined delinquent ticket data into a single database. Many jurisdictions within a state operate independent of the state DMV. Now these jurisdiction databases are being merged into the state DMV database, making it easier to identify and collect on unpaid tickets.

"There are quite a few varying factors as to the increase in violations. The main factor is the current state of the economy, which is forcing municipalities to look for alternative means to generate revenue. In the past, there were many municipalities that would not pursue each and every unpaid violation. But, more and more, they are looking at missed opportunities and going to greater lengths to collect on those unpaid violations, with some municipalities even going back up to 20 years," said Crooks.

Expansion of Camera Use

Additionally, with technology expanding, it has become very easy to install and monitor drivers through cameras at intersections, toll booths, HOV lanes, etc. "It gives cities more access to what is truly happening on the streets and highways. Most of the cameras being introduced are in high traffic areas and are designed to supplement the work of local police having to perform routine traffic stops. So, it is also viewed as a way to maximize the city's police resources, which are dwindling in some cases," said Crooks.

The expansion of camera use means an increase in violations. Red light violations cost anywhere from about $50 up to $150. "I think this trend is here to stay and will continue to grow with the technology becoming easier to install and for municipalities to implement," said Crooks. "In many instances these violation cameras are for safety reasons, but there are areas that will see this as a revenue-generating stream. In this uncertain economy, that makes it a very attractive option for struggling budgets."

Last year, more than 40 percent of all fleet violations were toll violations. As more automated toll systems are introduced nationwide, the volume of violations promises to increase. Typical reasons for toll violations are expired credit cards, dead transponder batteries, not transferring the transponder to a replacement vehicle, or failure to report the replacement vehicle's license plate number to the toll authority. These simple mistakes can be costly. For instance, if an employee drives through five tollbooths on the way to work and the same five back home, during the course of a month, that driver has incurred a minimum of 200 toll violations without knowing it. It is not uncommon for drivers to accumulate hundreds of dollars worth of toll violations and penalties.

When you drive through a designated E-ZPass lane, an antenna in the tollbooth reads the tag's ID number to automatically deduct the toll, along with an administrative fee, from your pre-paid account. If something blocks a unit from receiving the transmitted signal, it will not transmit back its ID number. For instance, a wire grid in a windshield, such as an instant de-icing system, can act as an electronic shield, preventing the E-ZPass unit from working properly, in which case it is necessary to mount the tag on the license plate. Some drivers are concerned that mounting the E-ZPass tag on the windshield or license plate will make it vulnerable to theft. However, unless an E-ZPass is mounted exactly as shown in the installation instructions, it may not be "read" by the toll booth antenna.

The number of miles of toll roads is expected to double over the next 10 years, according to ATS. Toll roads have become the answer as municipalities look for ways to either generate revenue and/or pay to build new roads. Toll violators can be charged as little as the cost of the toll, but the fine could also be as high as $50.

According to Crooks, another trend that could come to the U.S. is for cities to increase the toll fee during certain times of the day - mainly rush hour. The goal is to help ease congestion, which is why they are commonly referred to as "congestion fees."

For instance, London charges congestion fees and has experienced several benefits as a result, according to the Transport for London website. Since congestion charges started, traffic is 21-percent lower than pre-charge levels, or 70,000 fewer cars a day. Also, there has been a 6-percent increase in bus passengers during charging hours. The revenue generated from these charges has raised a significant amount of money for the City to invest back into improving transportation in London as well. Fleet drivers pay a daily charge of 7 pounds (or almost $11). However, drivers can purchase a monthly or annual charge at a discounted rate.

The privatization of street parking -- selling the rights to issue and manage parking tickets to a private party -- by many cities will accelerate ticket issuance.

"By outsourcing street parking monitoring, cities save a significant amount of money, so it's a no-brainer. Enforcement is at maximum efficiency by privatizing as well, resulting in even more violations given and then collected," said Crooks.

On the positive side, currently many parking meters are cash only. These will be changed out in favor of those that accept credit cards, which will make parking easier for drivers.

The City of Chicago was an early adopter of the outsourcing of parking meter enforcement and has had great financial success since inception in early 2009. The private company the city uses expects to take in more than $73 million this year - more than triple the city's annual $20 million before the meters were privatized, according to an article in the Aug. 12, 2010 edition of the Chicago Sun-Times newspaper.

Lanes once designated for carpools only may be opened to single occupants in the future, for a fee. High occupancy/toll lanes (HOT lanes) are a road pricing system that gives drivers in single-occupant vehicles access to high-occupancy vehicle lanes (HOV lanes).

Tolls are collected either by manned tollbooths, automatic number plate recognition, or electronic toll collection systems. Typically, these tolls increase as traffic density and congestion within the tolled lanes increase. The goal is to minimize traffic congestion as well as add convenience for drivers. Many cities are toying with the idea, but no fees have been determined for this road pricing system. And much like intersections, they will be monitored with cameras and violators will be fined.

SIDEBAR: What Can Fleet Managers Do?

It is important for fleet managers to implement a policy that ensures any violation a driver incurs will be billed back to the driver.

"Many fleets today do not have this type of stipulation in their fleet policy, so I think it is an integral part of managing these costs. More importantly, once you establish the policy, you have to stick to it for every driver in your fleet. To ensure compliance, communicating the set policy to your drivers and having them sign off on it is vital," said Eric Crooks, director of operations, license and title for LeasePlan USA. "In order to keep driver violations under control, it is important to ensure your drivers' information is kept current in our records. That way, the violation will be mailed to the correct address and paid before late fees are tacked on that cost the client unnecessary money."

A growing trend is for fleet managers to go after drivers for reimbursement of fines and late payment penalties, where in the past they had not. Fleet managers are paying more attention to violations, especially those managing sales fleets, where by the nature of the work, violations are more likely to occur. The one exception is executive fleets, which continue to be "verboten" territory for parking and toll violation enforcement.

Many fleets do not have a written fleet policy specific to driver reimbursement of parking ticket and toll violations. As jurisdictions become more aggressive in collection of unpaid fines, more fleet managers will be forced to deal with this issue because the dollar cost for these violations will creep up to where it will catch senior management's attention.

Some fleets deduct parking and toll violations from a salesperson's expense report. Other fleets require drivers to write a personal check reimbursing the company. Besides recouping lost revenue, a side benefit to reimbursement of violations is a decrease in the number of future tickets. Fleet managers who adopt a driver reimbursement policy for violations report a significant decrease in the volume of violations. Drivers who know they will be held financially accountable tend to be more careful or pay a ticket before it becomes delinquent.

When identifying violators, invariably, the 80/20 rule applies. In some cases, it is even higher. For some fleets, as much as 85 percent of the violations are incurred by 15 percent of the drivers. Many of these are the top salespeople, whose violations are ignored, creating an inequality in policy enforcement. Are they any different than the driver who blows an engine because he or she never changed the oil? Why should one be treated differently than the other? The answer is they shouldn't.