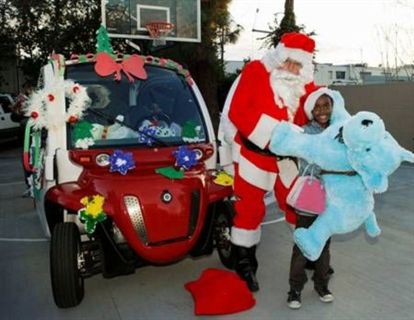 On December 23, "Santa Claus" delivered toys to children of the Boys & Girls Club of the West Valley in a zero-emission mode of transport, delivering presents with a red and white decorated GEM electric vehicle.

Toys were provided by the kindness of strangers through a toy drive facilitated by Barnett Ellman. The red GEM e4 car on loan to Santa was delivered by Bill Fenton of Response Vehicle Solutions, a GEM dealer, located in North Hollywood.

"We so appreciate the support of GEM – and organizations like them – because without that kind of support, many of these children would not get any holiday presents," said Jan Sobel, President/CEO of the Boys & Girls Club of the West Valley.