The new petrol engine, the 2.0 GTDi, produces no less than 203 hp despite its compact size and cylinder capacity. It pumps out 300 Nm of torque already from 1750 rpm thus securing a refined driving experience.

"We've succeeded in making a four-cylinder engine that is as powerful as a 2.5-litre five-cylinder unit, and it's also much more energy-efficient. This is a very welcome both for those customers who want high performance as well as supreme driveability and for the environment that benefits from the improved fuel efficiency. One of the most important reasons behind the results is our new, patented turbo system that has been tailor-made for smaller energy-efficient engines," says Magnus Jonsson, head of Product Development at Volvo Cars.

The turbocharger system has been developed in cooperation between Volvo Cars, Borg-Warner Turbo System and steel component manufacturer Benteler Automotive. The turbocharger (K03) is the market's smallest in relation to the engine's maximum output. The turbo not only gives excellent performance properties, it also improves exhaust aftertreatment by enabling quick heating of the catalyst.

The turbine housing is integrated into the manifold, an efficient solution with which Volvo already had previous good experience. The difference is that the new manifold and turbine housing are made of sheet steel instead of a casting. The sheet is lighter and more compact and, above all, this system generates less heat owing to its extra insulating layer. This allows high gas flow temperature and thus more efficient combustion.

A manifold made of sheet steel is admittedly nothing new but so far it has only been used in combination with cast turbine housing. The new, fully integrated turbo package made entirely of sheet steel is a world innovation and has been patented by Volvo. 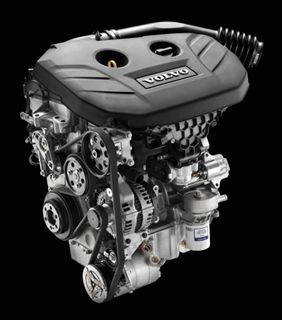 This innovative technology has made it possible to shape the exhaust ducts optimally to allow an optimal gas flow and generate the maximum pulse effect for the highest possible turbine efficiency. The pulse dynamics can thus be utilised to the limits in order to generate a high power output level across a wider range of engine revs. This translates into close to immediate response and good acceleration at both low and high speeds.

"High performance is important to many customers. However, being an innovative and highly efficient powertrain, there is also a significant gain in both fuel consumption and emissions with this technology" says Magnus Jonsson. "A Volvo S80 with this engine and automatic transmission consumes just 8.3 litres of fuel per 100 kilometres."

Direct injection gives a high fill rate in the combustion chamber, efficient combustion and low emissions. Thanks to this high fill rate, the turbo also starts spinning earlier, delivering alert response from low revs. This in turn results in swift acceleration and good driveability even from low speeds.

Direct injection also contributes to quick and stable combustion at high loads, and thus smooth engine operation even when the accelerator is floored.

The injection system is supplied by Bosch.

Volvo's new GTDi engine utilises variable timing for both camshafts. Both the inlet and the exhaust valves' opening times can be varied to optimise the overlap and ensure the correct fill rate in the combustion chamber irrespective of engine revs. This gives the combustion process maximum efficiency throughout the rev range and helps generate rapid acceleration at all speeds.

Both VVTs are of the conventional vane-type. The rotation of the inner and outer rotor is regulated by hydraulic pressure from the engine oil.  By opening and closing the oil control valves, the oil pressure and flow through the VVTs are changed until the desired angular deviation between the inner and outer rotor is achieved. The oil control valves are controlled by software in the Engine Management System using feedback from the cam position sensors.

"By combining direct injection and VVT with our new patented turbo system, we can offer an engine with low fuel consumption and low emissions, without having to compromise on performance or driving properties," says Magnus Jonsson. "We have created an engine that is as efficient in the city as it is on the highway. And since the design is based on an already-existing engine concept, we can offer more car buyers a highly fuel-efficient alternative at a reasonable price."

The engine will be offered in combination with Volvo's automatic six-speed Powershift transmission or a six-speed manual gearbox.

Volvo's new 2.0 GTDi engine is being initially launched on markets that offer tax incentives for engines below two litres in displacement: South-East Asia, the Netherlands, China, and Japan.