Sohl started Auto Driveaway in Philadelphia in 1952, primarily delivering cars from the East Coast to Florida destinations. He then franchised offices in Boston, Pittsburgh, Baltimore, Washington, D.C., and Miami. In 1960, Sohl became aware of a similar driveaway business (AAA Driveaway) in Chicago, which delivered used cars from the auto auctions in the Chicago area. He purchased the business and moved his family to Chicago.

In the early 1970s, Auto Driveaway became a regulated Interstate Commerce Commission (ICC) carrier. During the late 1970s and 1980s, Auto Driveaway expanded to over 75 offices throughout the United States and Canada, including Hawaii. During this period, the company was the primary motor home delivery service for Winnebago Industries in Iowa, delivering more than 5,000 recreational vehicles a year. The business had changed from private snowbird deliveries to corporate deliveries of vehicles for the Fortune 500 companies, which had large fleet departments to control their sales force and service vehicles. 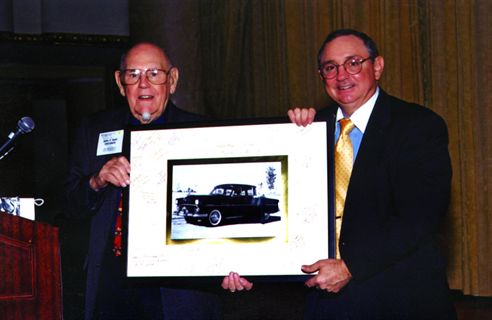 Sohl was actively involved in the fleet industry. He was an enthusiastic supporter of trade organizations such as NAFA Fleet Management Association (formerly National Association of Fleet Administrators), and the Automotive Fleet & Leasing Association (AFLA). The business became a franchisor in 1999 after the deregulation of the motor carrier industry. Auto Driveaway was an early affiliate member of NAFA, promoting membership and close relationships with the corporate fleet executives. During peak years, the business shipped over 40,000 vehicles and grossed over $18 million. From 2000 on, the primary customers were large leasing companies such as ARI, Wheels, GE Capital Fleet Services, PHH Arval, and Motorlease. The business was sold to the franchisees in 2004. After the death of his wife Rose, he met his current wife Barbara Ann aboard a Caribbean cruise and they settled in Gainsville, Fla.

Auto Driveaway celebrated its 50th anniversary in 2002. Sohl retired that year, after spending 50 years in the automotive industry.

According to his son Brandon, past-president of Auto Driveaway, "He was a true entrepreneur, starting a business from scratch and building it into a major service organization."

Sohl is survived by his wife, Barbara Ann; son, Brandon and his wife Linda; grandsons, Justin and Craig; and stepchildren, Debbie McClellan, Randy McClellan and wife Suzi, Mary Hunnicult and husband Ronnie, and Judy Hellstrom. A service will be held at a later date in Chicago.