STUTTGART, GERMANY - The Mercedes-Benz F800 Style, to be unveiled at the 2010 Geneva Auto Show, introduces a new "multi-drive" platform that can accommodate a fuel cell or a plug-in hybrid powertrain, according to Inside Line.

The five-passenger F800 Style is fitted for the show with a 300 hp, direct-injected gasoline V-6 engine and a 109-hp electric motor integrated into the seven-speed automatic transmission. Mercedes claims a total output of 409 hp for the F800.

The concept's hybrid powertrain provides 0-60 acceleration in 4.7 seconds, says Mercedes, with top speed limited to 155 mph. On pure electric power, the F800 has a claimed top speed of 75 mph and a range of just 18 miles, according to Inside Line.

The Mercedes F800's lithium-ion battery pack can be recharged from household current or a local charging station.

Mercedes says its F-Cell technology also could be adapted to the F800, bundling a 136-hp, rear-drive electric motor that generates 214 pound-feet of torque with a fuel cell stack. Range on this version is said to be nearly 375 miles. 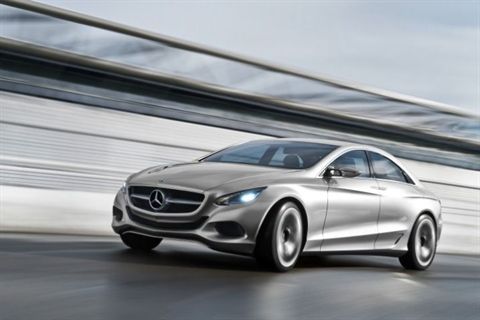 The F800 incorporates a number of other advanced technologies, including an enhancement on the automaker's COMAND system with a touchpad interface. A camera in the cabin records images of the user's hand on the pad. A transparent image of the hand is displayed over the menu functions, which are operated by applying slight pressure to the touchpad. Mercedes says the system, which controls such functions as climate, audio, phone, navigation and Internet functions, reduces driver distraction.

Mercedes' Distronic adaptive cruise control also gains added functionality. Now called Distronic Plus Traffic Jam Assistant, the system will be capable of automatically steering and following another vehicle into a curve at speeds up to 25 mph while regulating the distance between the two vehicles.

Next there's the PreSafe 360-degree collision avoidance system, which extends monitoring to the area behind the vehicle, automatically engaging the brakes milliseconds before an anticipated rear-end collision.

Access to the Mercedes-Benz F800 Style concept is provided by conventional hinged front doors and rear pivot-and-slide doors that open rearward. Inside are lightweight seats made of magnesium and carbon-fiber, backed with fine netting and trimmed in wood veneer.