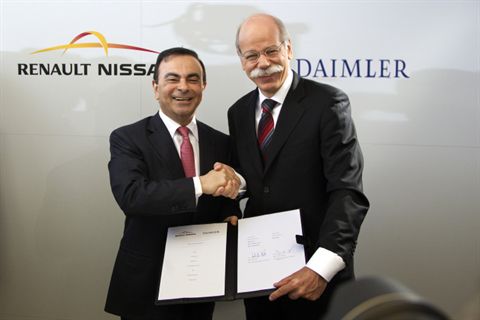 BRUSSELS, BELGIUM - Nissan, Renault, and Daimler AG announced April 7 that they formed a partnership and will cooperate in light commercial vehicles, develop a new generation of small cars, and share engines.

Dr. Dieter Zetsche, chairman of the Board of Management of Daimler AG and head of Mercedes-Benz Cars, and Carlos Ghosn, chairman and CEO of the Renault-Nissan Alliance, held a joint press conference April 7 to announce the strategic cooperation in the light commercial vehicle segment.

Under the agreement, Mercedes-Benz Vans will expand its portfolio to offer an all-new entry-level van intended for commercial usage, from 2012 onwards. The technical basis of this van will come from Renault and will be produced at the Renault plant in Maubeuge, France. Both partners will benefit from higher unit sales, better capacity utilization, shared investment burden, resulting in a better overall cost basis, according to company statements.

In addition to cooperating on small commercial vehicles, selected powertrain components will also be shared to enlarge mid-size van product offering and sales volumes. This includes a small diesel engine and transmissions which Daimler will procure from Renault-Nissan for its mid-size van, the Mercedes-Benz Vito. This additional entry-level motorization will generate additional unit sales for Mercedes-Benz and optimized capacity utilization at Renault.

Daimler, Renault, and Nissan stated they will also cooperate on future gasoline and diesel engines.

As part of the agreement, Renault and Nissan will also acquire a 3.1 percent stake in Daimler, while the German automaker will acquire the same-size stakes in each company.