NEW YORK - Mercedes-Benz celebrated the world premiere of the redesigned 2011MY R-Class luxury crossover at the New York International Auto Show, April 2-11. The 2011MY R-Class combines the spaciousness of a luxury SUV with the safety, style, and exclusivity of a Mercedes-Benz sedan, according to the manufacturer. 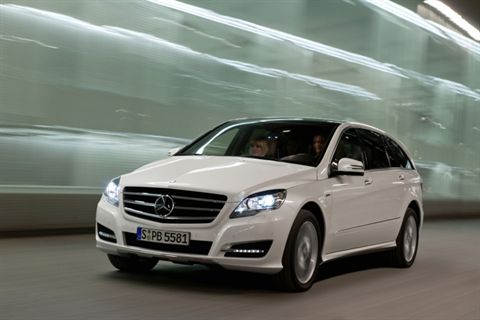 The new 2011MY E350 4MATIC wagon joins the sedan, coupe, and cabrio models to complete the versatile E-Class lineup. Featuring standard 4MATIC all-wheel drive and a 7-speed automatic transmission, the V-6 E350 4MATIC wagon features a 3.5L V-6 producing 268-hp and 258 lb.-ft. of torque. Detailed with expressive aluminum roof rails, the sleek 2011 E-Class wagon appears to have continuous side windows from the front windshield all the way to the rear lift gate, thanks to flush roof pillars trimmed to blend with the side glass.

A 60-40 fold-down rear seat makes for cavernous cargo capacity that's highly flexible; the E350 4MATIC wagon is the only vehicle in its market segment to feature seven-place seating as standard. With coil spring suspension up front and electronically controlled air springs at the rear, the load-leveling air suspension keeps the car level regardless of the cargo weight.

Automobile fascination paired with spectacular race car design - that is the new Mercedes-Benz SLS AMG GT3. The racing version of the 2011 SLS AMG has been conceived as a customer sport vehicle for participation in race series based on FIA
GT3 regulations. Meticulous lightweight construction and optimized chassis, brakes and aerodynamics deliver uncompromising dynamics. The extra special SLS AMG will make its race track debut in 2011.

The MY2011 Mercedes-Benz R-Class - Safety, Luxury and First-Class Comfort

The completely redesigned MY2011 R-Class front end completely transforms its overall appearance, according to the manufacturer, taking its inspiration from Mercedes-Benz sedans and SUV models. The latest generation offers the interior versatility central to the R-Class vehicle concept, while also delivering the all-weather confidence of 4MATIC all-wheel drive as standard (U.S. models only). The R-Class celebrated its world premiere at the New York International Auto Show (NYIAS) March 31.

For the U.S. market, the R-Class is offered with a choice of two fuel-efficient engines. The R350 4MATIC delivers 268 hp and 258 lb-ft of torque, yet achieves an estimated 14/19 mpg (city/hwy), while the R350 BlueTEC 4MATIC is one of the world's cleanest diesel vehicles. The V6 turbodiesel engine generates an output of 210 hp (155 kW) and an impressive torque of 400 lb-ft. Equipped with the highly-effective AdBlue© exhaust treatment system for low emissions, the diesel engine achieves an estimated 18/24 mpg (city/hwy).