FARMINGTON HILLS, MI - The Bosch automatic emergency braking system is going into series production for the first time in the new Audi A8, as part of the "pre-sense" package. It provides effective support for drivers in critical situations in which there is the threat of a rear-end collision.

"Roughly 80 percent of drivers do not hit the brakes at all before a rear-end collision, or do not use the car's full braking capacity," said Dr. Werner Struth, president of the Bosch Chassis Systems Control division, summarizing an analysis of GIDAS, the German accident database.

The Bosch system helps drivers to react properly. The technical basis of this system is the ESP electronic stability program and the LRR3 long-range radar sensors of the ACC adaptive cruise control system, which are complemented by a video sensor.

Sensor data fusion for the best possible recognition of the traffic situation
Of all the accidents involving injury and fatalities in Germany, 15 percent are rear-end collisions. Predictive systems that interpret the state of the traffic ahead of the vehicle, warn drivers, support them, and finally react automatically can help to significantly reduce the number of such accidents. 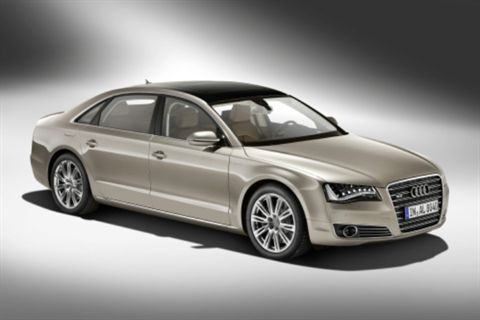 The earlier and the more precisely the situation in front of the vehicle can be interpreted, the better the driver assistance functions can help the driver. Bosch engineers have thus made an interplay of radar and video data possible, for optimum recognition of traffic situations.

Apart from the high-performance Bosch ESP premium brake control system, the Audi A8 features two long-range radar sensors, which are housed at the left and right of the front bumper. These new Bosch generation 3 sensors can detect objects within a beam width of approximately 40 degrees at a distance of up to 250 meters, and can determine their position and speed. The video camera is positioned behind the front windscreen, at the same height as the rear-view mirror. The advantage of video technology is the high level of information content, which makes persons, vehicles, or traffic signs easy to identify.

Another benefit is the technology's ability to set off one image against another, as well as the angle detection of objects. The radar signals, for their part, deliver precise data as to the position and speed of the persons, vehicles, or traffic signs featured in the video images.

In a first step, if the predictive emergency braking system detects a potential obstacle, such as a vehicle that is slowing down very fast or coming to a standstill, the brake is primed for the emergency braking that may follow. This involves the brake control system imperceptibly building up slight pressure, which brings the brake pads up close to the discs, so that they can provide immediate deceleration in the event of a subsequent braking operation. If the driver does not react, and the vehicle comes closer, an acoustic warning is given, followed by automatic partial braking, initiated via a brief jerk on the brakes. If the driver still does not react, and if a collision can no longer be prevented, the system brakes automatically at maximum pressure roughly half a second before impact, in order to reduce speed of impact and mitigate the consequences of the accident.

The ACC function has also been extended. With the help of the video data for example, the system reacts more quickly when overtaking other vehicles and when other cars veer into the lane ahead. Moreover, in the new Audi, the signals from the Bosch video camera are used for the automatic headlight control and for the lane departure warning system. Additional functions in the ESP provide further comfort and safety features. The hill-hold control, for example, can prevent the vehicle from rolling backwards on an incline. When towing, ESP detects whether a trailer is weaving dangerously, and helps the driver to counteract.

Many other systems and components in the new Audi A8 are also made by Bosch: there is the instrument cluster with its large color display, the control unit and sensors for the passenger restraint system, a domain control unit, the starter, and the wiper drive. For the gasoline engines of the new Audi A8, Bosch supplies various engine control units, and the two initially available diesel engines use Bosch injection systems with piezo valves and injection pressure of up to 2,000 bar.

Read more about Audi Audi A8