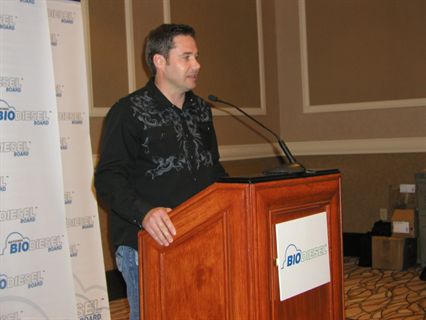 LAS VEGAS - Joe Jobe, CEO of the National Biodiesel Board (NBB), recently provided updates on "what's going on in the world of biodiesel" at the 2010 Alternative Fuels & Vehicles National Conference + Expo in Las Vegas.

In the fifth month without the biodiesel tax credit, Jobe renewed his call for Congress to put Americans back to work immediately by retroactively reinstating the expired tax incentive. The industry is barely operating and at risk of total collapse without it, he warned.

The biodiesel tax credit took effect January 1, 2005. Since then, it has resulted in the construction of more 150 renewable refineries in 44 states, 23,000 jobs, billions of dollars of net tax revenue to the U.S. Treasury, and the displacement of billions of gallons of petroleum. The biodiesel tax credit lapsed on December 31, 2009, along with all other expiring tax provisions.

Jobe urged energy leaders in attendance, many of whom were Clean Cities coordinators, to take action by writing and calling state delegators. "As long as we've been shouting, they still haven't heard about the criticalness." He also pointed out the critical environmental benefits of biodiesel that could be lost if the tax incentive is not reinstated immediately.

The biodiesel tax credit has broad bipartisan support and has passed both Houses of Congress in a broader "tax extenders package". Congress need only reconcile the two versions of this package and send it to the President for signature.