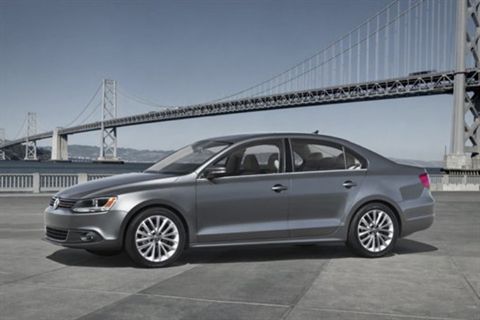 Updates to the 2011-MY Jetta include:

• Longer wheelbase and exterior. At 182.7-inches long, 57.1 inches tall and 70.1 inches wide, the 2011 Jetta is more than 3.5 inches longer than its predecessors. The extended wheelbase provides rear legroom of 38.1 inches, a 2.6-inch gain from the previous model.

• Ergonomic design. A common conceptual thread throughout the car is the intuitive controls and well-arranged instruments. The new steering wheel design allows the right hand to rest on the gear shift grip. Further up on the center console are the newly designed and intuitive controls for climate, radio, and radio-navigation systems.The console section is slightly inclined toward the driver for ideal alignment of the cockpit.Also in optimal view are the round instruments.The multifunction display (trip computer) is located between them.

• Enhanced safety. Previous Jetta versions received accolades for safety with features such as electronic stability control and tire pressure monitoring standard. The all-new 2011 Jetta has been further enhanced with even more protections and crash safety improvements, according to the automaker.

Four engines will be available in the U.S. and Canada, including a 2.0L turbodiesel direct injection (TDI) Clean Diesel featuring common rail injection with 236 lb.-ft. of torque. The engine runs as quietly as a gasoline engine, but yields the power of a sports car achieving 0-60 mph in 8.7 seconds, according to VW.

Additional engines include the 2.0, 2.5 R5, and as of 2011, the 2.0 TSI.  All Jetta engines will be offered with a manual transmission as standard equipment.  An automatic transmission will also be available with each engine version as an option.  On the new 2.0L TDI and 2.0L TSI, Volkswagen will offer the 6-speed DSG - one of the most advanced and efficient automatic transmission systems in the world, according to the manufacturer. In the U.S., S, SE, SEL and TDI versions of the Jetta will be available, as will a 2.0L GLI.