HERNDON, VA - A jury of 71 leading motoring journalists from 35 countries voted the turbocharged 2.5L FSI in the Audi TT RS as the "International Engine of the Year 2010" in the 2.0L to 2.5L category.

International Engine of the Year jury members felt that the 2.5L engine in the TT RS is: "Torque, power, a beautiful sound - this engine has it all. This is five-cylinder architecture at its best".

The engine's low weight of only 183 kilograms (403.45 lb) is also a top figure. It helps keep the total weight of the TT RS low and also offers significant advantages for the distribution of axle loads and thus for the car's handling.

This is the sixth category win in a row at the International Engine of the Year Awards for Audi TFSI technology. For the last five years, the Audi 2.0L TFSI engine has won the award in the 1.8L to 2.0L category.  FSI direct gasoline injection and turbocharging are two of Audi's core technologies. 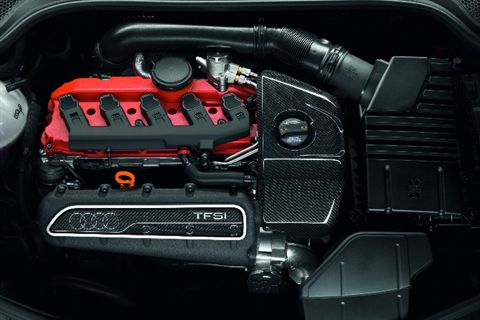