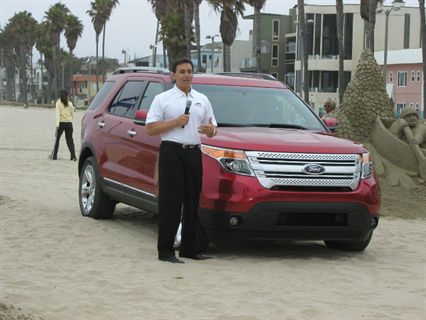 VENICE, CA - The all-new, 2011 Ford Explorer was recently unveiled at a preview July 26 in Venice Beach, Calif. Automotive professionals, including journalists and dealers, had the opportunity to see first-hand the highly publicized SUV.

Paul Mascarenas, Ford Motor Co. vice president of engineering for Global Product Development, opened up the presentation, emphasizing the automaker's efforts to "reinvent ourselves and our company," identifying the new Explorer as the "most significant reinvention yet." According to Mascarenas, the Explorer will "redefine the SUV segment going forward."

Following Mascarenas was Mark Fields, executive vice president of Ford Motor Co. and president of The Americas. Comparing the process of reinventing the Explorer to creating sand sculptures, Fields described the beauty of the reinvention as "chang[ing] everything while compromising absolutely nothing."

Frank Davis, executive director North American Product Programs at Ford Motor Co., highlighted several of the Explorer's safety technologies - "technology only seen before in luxury cars," according to Davis. Among the safety features is Curve Control, which senses when a driver is taking a curve too quickly. The technology, just announced at the end of June, debuts as standard equipment on the 2011 Ford Explorer.

In addition, "intuitive-to-operate" terrain management puts the Explorer in a position "ready to tackle sand, snow, and mud," said Davis. Models equipped with intelligent 4WD with terrain management use technology to provide the driver with security and confidence in a variety of climate and surface conditions.

Redesigned inside and out, the 2011 Ford Explorer is expected to deliver 30-percent more fuel efficiency over the current V-6 model when equipped with an optional 2.0L EcoBoost I-4 engine.

Read more about Ford Explorer 2011-MY