HERNDON, VA - Audi announced that pricing for the new 2011 R8 Spyder 5.2 quattro supercar will begin at $161,000 with the first of the hand-assembled models reaching U.S. showrooms as soon as next month.

Audi also confirmed that it intends to sell the Audi RS5 in the U.S. market starting in 2012. The high-revving 4.2L V-8 engine in the Audi RS5 Coupe generates 450 horsepower. Like all Audi RS models sold in Europe and other markets, the RS5 Coupe applies its power to the road with quattro permanent all-wheel drive. Details on equipment levels, pricing and fuel economy standards will be released at a later date.

The newest Audi R8 maintains the perfect balance of form and function that has distinguished coupe models in the R8 sports car family. But the R8 Spyder adds innovative touches that integrate the soft top without altering the dynamic styling lines, optimal weight distribution or high-performance characteristics of the coupe models.

Features include a soft top, which weighs just 66 pounds and folds or opens in just 19 seconds up to 31 mph. It combines with a heated safety glass rear window that can be extended or retracted with the top up or down. The soft top features triple layer insulation for interior acoustics and comfort close to levels enjoyed in the coupes, according to the manufacturer. 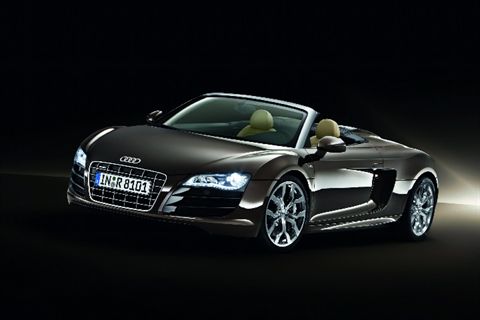 One visible difference between the Audi R8 Spyder 5.2 quattro and the Audi R8 Coupe models is the absence of the signature sideblades on the Spyder - a design change that retains the coupe lines, while accentuating the unique characteristics of the open-top Spyder. Another significant difference on the R8 Spyder is the use of dramatic Aluminum Optic vents on the new rear engine cover and aluminum a-pillars.

Like all Audi R8 models, the R8 Spyder 5.2 quattro reflects the Audi commitment to lightweight construction for better handling and efficiency. The hallmark of the R8 Spyder is the industry-leading aluminum Audi Space Frame technology used for most of the body. The rear quarter-panel fenders and customized engine hood are made from Carbon Fiber Reinforced Polymers.