TORRANCE, CA - After receiving stylish exterior changes in 2010, the GS 450h enters the 2011 model-year as one a refined hybrid luxury sport sedan with a myriad of convenience features, according to Lexus.

Based on the GS platform and featuring Lexus Hybrid Drive technology, the GS 450h offers V8-like performance with greater fuel efficiency, according to the manufacturer.

As a full hybrid, the GS 450h is capable of operating in gas-only or electric-only modes, or a combination of the two. Due to its transmission, the GS 450h was the first hybrid vehicle to enable the electric drive motor to contribute to highway performance, not just slow-speed driving, according to Lexus.

The GS 450h model's version of the Lexus Hybrid Drive powertrain combines a 3.5L V-6 engine with a compact, permanent magnet electric motor - all driving the rear wheels. The hybrid powertrain collectively produces 340 horsepower and can accelerate the GS 450h from 0-60 mph in 5.2 seconds.

The hybrid system's electric-drive motor delivers maximum torque immediately upon demand. This power-delivery characteristic is most noticeable, and most useful, during 30-to-50 mph passing and in traffic-merging maneuvers, according to Lexus. The GS 450h returns EPA-estimated fuel economy of 22 mpg city/25 highway/23 combined and is certified as a Super-Low Emissions Vehicle II (SULEV II).

The gasoline V-6 uses an Electronic Throttle Control System with intelligence (ETCS-i) and a dual fuel-injection system that combines the benefits of direct injection with those of port injection. Dual Variable Valve Timing with intelligence (VVT-i) operates on the intake and exhaust valves to further enhance power and torque across a broad engine speed range. 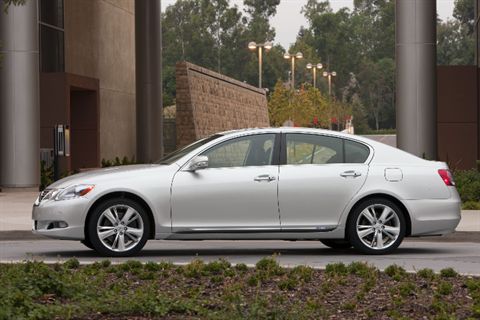 The GS 450h hybrid powertrain uses two motor-generators, MG1 and MG2 (the drive motor). Each performs specific functions and can operate as both a motor and a generator, although MG1 is used as a starter motor and provides no motive force. The engine-driven generator (MG1) can charge the battery pack or provide additional power to MG2 as needed.

A 288-volt DC Nickel Metal Hydride (Ni-MH) battery pack is installed behind the rear seat area. The battery's power is directed through a "boost converter" that can efficiently raise voltage to a maximum 650V DC. An inverter changes this to AC, providing its elevated power to the 147-kW electric motor, which turns as high as 14,400 rpm. A 12-volt auxiliary battery powers various vehicle systems, including audio and navigation.

This configuration allows the electric drive motor to operate in high or low ranges, with seamless transitions between the two. MG2 can therefore contribute power not just for acceleration, but at higher cruising speeds as well.

The GS 450h is driven solely by its electric motor when starting, traveling slowly, and during low-load driving, the resulting super-quiet operation enhancing the luxury experience. A regenerative braking system further boosts system efficiency. When the vehicle is coasting or the brakes are applied, the electric motors function as generators, capturing kinetic energy that would normally be lost as heat through the brakes and transforming it into useable electricity to recharge the batteries.