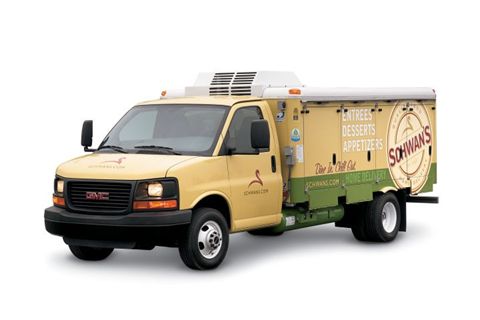 MARSHALL, MN - Schwan's Home Service, a direct-to-home food delivery business with the largest propane fleet in the U.S., gave its fleet a makeover with brighter coloring and bigger logos.

The company said 90 percent of its 6,000 trucks run on propane, a cleaner burning fuel that results in less engine emission contaminants. These trucks fuel tanks are painted green in honor of their propane use.

The company also said these new trucks are also roughly 6,000 lbs lighter, resulting in increased fuel economy. Along with being more fuel efficient, the easily recognizable yellow trucks are also quieter and safer to operate.

"We are very excited to continue our tradition of propane fueled trucks in a sleek, new model," said Scott McNair, president of The Schwan Food Company. "While our customers are sure to recognize the outside of our trucks, it is important that they know that inside there is a fuel efficient machine that is safer for our environment."

Company founder Marvin Schwan began using propane in his trucks in the early 1970s in response to the oil embargoes.