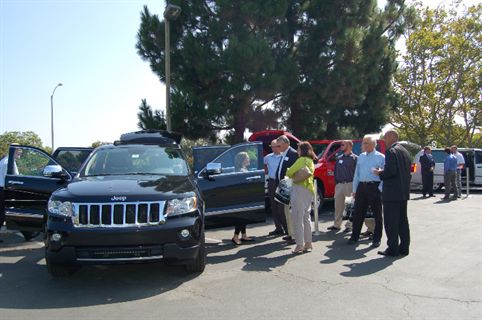 LONG BEACH, CA - Approximately 40 automotive professionals gathered Aug. 12 at the Marriott in Long Beach, Calif., to get a preview of the Chrysler, Jeep, Dodge, and Ram 2011 product lineup. Representatives from Nestle, Hewlett Packard, CSC, Sempra Energy, as well as Los Angeles and Riverside Counties were among those in attendance.

The meeting started off with some light-hearted entertainment, with the latest commercials from Chrysler, Jeep, Dodge, Ram, and Fiat shown onscreen for attendees.

Sneak peek photos of some of the newest models across all brands were revealed, redesigned with an emphasis on more stylish, sleeker exterior and improved interior for a more sophisticated feel.

Addressing fleets in attendance, Dankovich told attendees, "There's a lot of good things happening with Chrysler. We are a growing company, and we have a lot to offer, and we would like to share our business with you."

"Since June of 2009, we've become an all-new company," said Baldridge. "We are changing interiors in just about every car we make and we have been working really hard in the last year and a half to bring some great products to market. Stay tuned for 2011-2014."

Desai, who introduced the Jeep offerings, voiced her enthusiasm with the 2011 Jeep Grand Cherokee, explaining, "This really is the flagship of what our product will look like going forward." Describing the new product exteriors as "smoothed out," she said the appearance will "always look fresh."

After the presentations, attendees were invited to check out a few select models on display outside the hotel, including the new Jeep Cherokee.

The event was one of three other West Coast previews, which included one in San Diego on Aug. 11 and one in Phoenix on Aug. 13. The automaker held an advanced 2011-MY Fleet Preview in Detroit in May.