About the 2011 Infiniti M
The all-new 2011 Infiniti M embraces the essence of all things Infiniti - style, performance, luxury, craftsmanship and technology - taking each to the highest levels ever for Infiniti's halo sedan. It is available in M37 and M56 model designations, with rear-wheel drive or Infiniti's Intelligent All-Wheel Drive system. The M37 features a 330-horsepower 3.7L V-6 engine - with increased power and fuel economy versus the previous generation M35's 3.5L V-6. The M56 also offers more power and better fuel economy from an all-new 420-horsepower 5.6-liter V8 (versus the previous generation M45's 4.5L (V-8). Both the M37 and M56 engines feature Infiniti's advanced VVEL (Variable Valve Event & Lift) system and all models are equipped with a standard 7-speed automatic transmission. A special Sport Package, offered on rear-wheel drive models, features 4-Wheel Active Steer (4WAS), sport-tuned suspension, Sport Brakes and 20-inch wheels and tires. 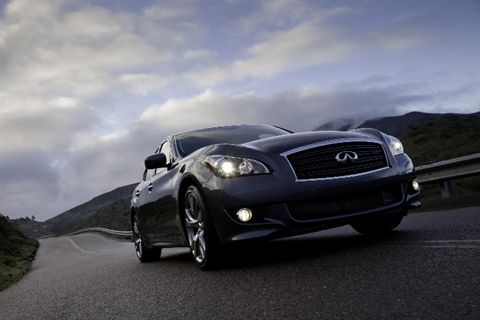 The 2011 M is also a showcase for Infiniti's advanced, user-focused technologies, carrying on the tradition of the previous generation M.