ATLANTA - As it prepares to launch its first hybrid vehicle, the Cayenne S Hybrid, Porsche announced it is achieving significant fuel savings in all its new-generation Cayenne models.

With consumption reductions of 20-21 percent in its overall EPA fuel economy rating (with the hybrid), the 2011 Cayenne sport utility vehicle has achieved its goal of improved fuel efficiency and the reduction of greenhouse gas emissions.

The basic principle of the "Porsche Intelligent Performance" philosophy, which is providing more power with lower consumption, increased efficiency, and reduced CO2 emissions, particularly applies to the new Cayenne model series that went on sale this year. The six-cylinder Cayenne model consumes 20-percent less fuel than its predecessor, while the V-8 Cayenne S and Cayenne Turbo models have enjoyed similar reductions. At the same time, all of these new vehicles offer more power and better performance.

This reduction in consumption across the entire Cayenne range can partly be attributed to use of the new eight-speed Tiptronic S automatic transmission with automatic stop/start function and a wide gear ratio range. Also critical to the improved efficiency is the Cayenne's weight reduction and intelligent lightweight construction.  Engineers used a weight-optimized material mix and modified the vehicle's overall construction, which included the development and use of a new lighter-weight four-wheel drive system. This 400-lb. weight loss not only helped improve the Cayenne's overall fuel consumption and CO2 emissions but also improved performance, agility, and handling. 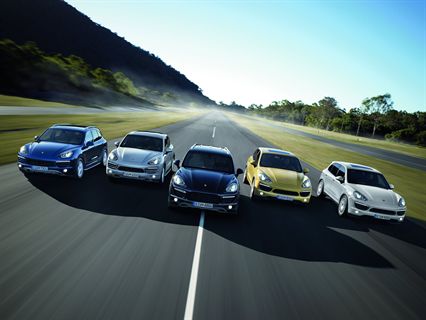 Of course, the new highlight within the model series - the Cayenne S Hybrid - features a highly sophisticated parallel full hybrid drive system, which delivers even more impressive figures. Offering the performance of a V-8 with the economy of a V-6, it combines the power output of a supercharged V-6 combustion engine with an electric motor.