Currently available in the market, the Audi A3 TDI provides environmental benefits by producing about 30-less less greenhouse gas than a car powered by a comparable gasoline engine, with up to 50-percent better fuel economy.

The potential of clean-burning synthetic diesel, such as RenDiesel, to produce even less emissions, indeed points to a bright future ahead for Audi TDI technology as a viable green solution.

"The benefits of modern clean diesels like the Audi A3 TDI are apparent on many levels, from improved environmental performance to providing the kind of driving performance people expect," said Ron Cogan, editor and publisher of Green Car Journal and editor of GreenCar.com. "Operating on advanced, clean burning fuels like synthetic RenDiesel simply makes the diesel equation even more compelling." 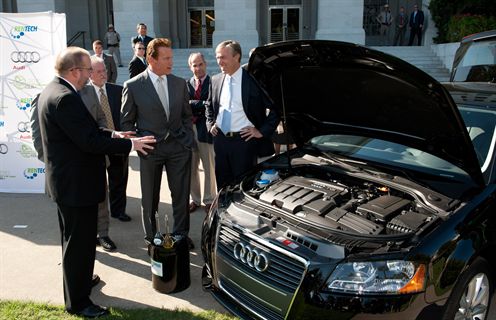 "We are proud to have partnered with Audi and Green Car Journal on this successful 1,000 mile journey which demonstrated that domestically produced synthetic RenDiesel is a viable solution today to reducing vehicle tailpipe and greenhouse gas emissions," said D. Hunt Ramsbottom, President and CEO of Rentech. "The environmental and performance benefits of RenDiesel seen while driving the Audi A3 TDI show promise for a clean diesel energy future," Ramsbottom added.

The two Audi A3 TDIs on the demonstration tour are representative of the clean diesel technology that earned the prestigious Green Car of the Year award at last year's Los Angeles Auto Show. The vehicles ran the entire route, from the farthest reaches of northern California to southern California, on Rentech's synthetic diesel fuel, expected to be produced in commercial quantities in a few years at the Company's new project in Rialto, California, that will produce synthetic diesel fuel from green waste and other organic materials diverted from landfills.

The RenDiesel fuel used on this drive was produced from natural gas at Rentech's demonstration plant in Colorado. RenDiesel can also be made from synthetic gas produced from biomass and waste resources. RenDiesel provides a viable solution that can be deployed to minimize the transportation sector's environmental impact. The renewable RenDiesel to be produced at Rentech's Rialto Project is expected to reduce GHG emissions on a lifecycle basis by as much as 97 percent over conventional diesel fuel and by a comparable amount over electric vehicles. A vehicle using RenDiesel is also expected to be as much as two times more fuel efficient than one running on ethanol. RenDiesel contains approximately 60-percent more energy per gallon than ethanol and diesel engines typically achieve 20-40 percent more miles per gallon than gasoline engines. RenDiesel also produces fewer volatile organic compound (VOC) emissions than ethanol or traditional diesel.

Throughout the "Eureka! Diesel Drives the Future" demonstration drive, one of the Audi A3 TDIs achieved 39.7 mpg on average, while the other car averaged 43 mpg. The Audi A3 TDI has an EPA average highway fuel economy rating of 42 mpg on traditional clean diesel fuel. The results were promising, demonstrating that RenDiesel synthetic fuel can operate for more than 1,000 miles with no noticeable differences in performance compared to traditional fuels, and research is planned to confirm that this performance can persist over the full lifecycle of vehicles such as the Audi A3.