The IPL G Coupe is the first production vehicle in the new Infiniti Performance Line (IPL), which is designed to offer a new level of premium performance for Infiniti vehicles. More than just focusing on engine power and acceleration, IPL redefines total vehicle performance - with unique driving attributes and exclusive exterior and interior features.

The IPL G Coupe builds on the foundation of the Infiniti G37 Coupe Journey rear-wheel drive model and adds extensive modifications throughout the vehicle, including unique exterior and interior treatments. The IPL G Coupe's advanced VQ37HR 3.7-liter V6 engine generates 348 horsepower, an increase of 18 horsepower over the G37 Coupe. In addition, the suspension, steering and exhaust systems have been specially tuned to provide unmatched driving exhilaration.

The Manufacturer's Suggested Retail Prices (MSRP)* for the 2011 IPL G Coupe are: 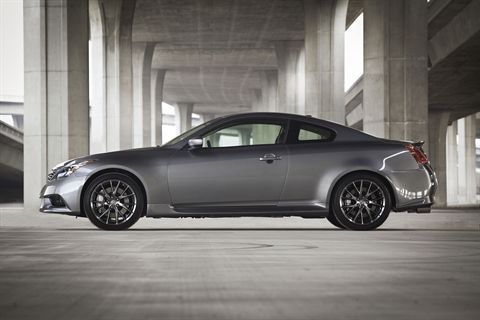 The IPL G Coupe's advanced VQ37HR 3.7L V-6 engine management system has been recalibrated through air-fuel mixture and ignition timing optimization, raising the maximum horsepower output point to 7,400 rpm (from 7,000 rpm). To obtain a natural acceleration feel, the torque curve from low revs to the maximum torque point (5,200 rpm) was tuned for linearity. As a result of both the exhaust system and engine management changes, the IPL G Coupe generates 348 horsepower, an increase of 18 hp over the G37 Coupe, and 276 lb.-ft. of torque (+6 lb.-ft.).