LOS ANGELES - Several new models were unveiled during press days, Nov. 17-18, at the Los Angeles Auto Show. Among the vehicles at the show were the Chevrolet Volt, as well as the all-new 2012 Ford Focus. 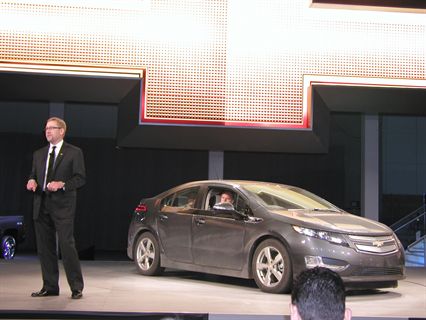 Earning accolades from a number of media outlets, the heart of the
Chevrolet Volt is its Voltec propulsion system, which combines pure electric drive and an efficient, range-extending engine, giving to the Volt up to 350 total miles of range. 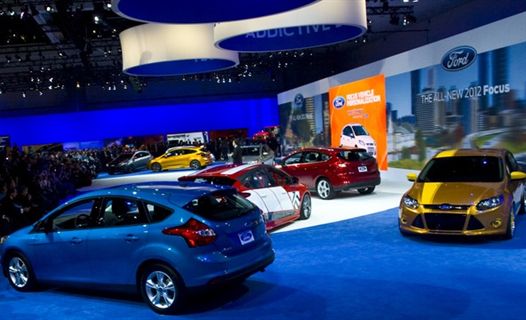 The 2.0L engine coming early next year to Ford's new 2012 Focus will be one of the first on the market to combine the technology of gasoline direct injection (DI) with twin independent variable camshaft timing (Ti-VCT) and E85 flex fuel capability. The combination of these technologies helps make the dual-overhead-camshaft (DOHC) Focus four-cylinder one of the most powerful, fuel-efficient and refined engines in its class and one of the most advanced non-turbocharged four-cylinder engines Ford has ever offered. Horsepower is rated at 160 and torque at 146 lb.-ft., up from 140 and 136, respectively, in the 2011 Ford Focus. 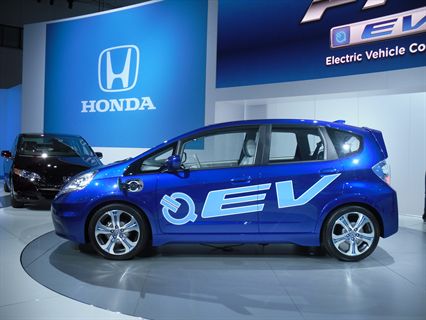 The Fit EV Concept hints strongly at the direction and styling for Honda's upcoming production Fit EV all-electric vehicle, which will be introduced to the U.S. and Japan in 2012. The Fit EV is designed to meet the daily driving needs of the average metropolitan commuter and utilizes the same 5-passenger layout found in the popular Fit hatchback. When the Fit EV production model is introduced, it will be powered by a lithium-ion battery and coaxial electric motor.

The Fit EV will have a top speed of 90 mph and achieve an estimated 100-mile driving range per charge using the US EPA LA4(1) city cycle (70 miles when applying EPA's adjustment factor). Driving range can be maximized by use of an innovative 3-mode electric drive system, adapted from the 2011 Honda CR-Z sport hybrid. The system allows the driver to select between Econ, Normal, and Sport to change the driving experience to maximize efficiency or improve acceleration. While in Econ mode, practical driving range can increase by as much as 17 percent, compared to driving in Normal mode, and up to 25 percent compared to driving in Sport mode.

Acceleration improves significantly when in Sport mode, generating performance similar to a vehicle equipped with a 2.0L gasoline engine.
In addition to the 3-mode E-Drive system, the Fit EV will include several interactive coaching systems to assist the driver in maximizing battery range. A special meter display advises the driver when to shut off air conditioning and other accessories to conserve battery power. Battery recharging can be accomplished in less than 12 hours when using a conventional 120V outlet, and less than six hours when using a 240V outlet, according to Honda.
[PAGEBREAK]
Toyota RAV4 EV

The second-generation Toyota RAV4 EV unveiled at the show is one of 35 vehicles built for a demonstration and evaluation program through 2011, aiming at market arrival of a fully-engineered vehicle in 2012. The fully-engineered vehicle will have a target range of 100 miles in actual road driving patterns, in a wide range of climates and conditions.

Tesla was responsible for building and supplying the battery, as well as other related parts, that met specific Toyota engineering specifications in performance, quality, and durability. Toyota was responsible for development and manufacturing leadership and the seamless integration of the powertrain.

The demonstration vehicle weighs approximately 220 lbs. more than the current RAV4 V-6, yet it will accelerate from zero to sixty nearly as quickly.

This added weight factor required significant retuning of major components and a prioritized focus on weight distribution. Not only were suspension and steering modified significantly, major components needed to be relocated to better balance the increased mass of the battery pack.
The demonstration vehicle Toyota is currently testing is powered by a lithium metal oxide battery with useable output rated in the mid-30 kwh range. However, many decisions regarding both the product, as well as the business model, have not been finalized. Battery size and final output ratings, as well as pricing and volume projections of the vehicle Toyota plans to bring to market in 2012, have not been decided. 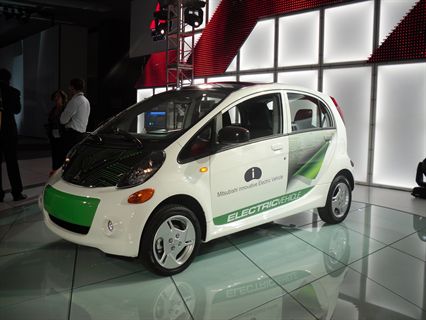 Mitsubishi Motors unveiled its first all-electric production vehicle bound for the North American market. Based on the gasoline-powered "i" minicar in the Japanese market, the four-door 2012 model serves as the basis for the new 100-percent battery-powered Mitsubishi "i" for the North American market. The "i" will be the first North American production vehicle to be powered by Mitsubishi innovative Electric Vehicle (MiEV) technology. Conventional automotive systems (including gasoline engine, transmission, and fuel tank) have been replaced by advanced components including a lithium-ion battery system, electric motor, and an efficient battery charging system. Mitsubishi has been selling the electric vehicle car in its home market since the summer of 2009; production has already commenced for the European-spec i-MiEV, with deliveries beginning later this year.

Mitsubishi anticipates an initial roll out of the "i" to its dealership network in the western United States (specifically California, Oregon, Washington and Hawaii) in November 2011, with entry into the northeastern market to follow by March 2012 and nationwide availability by the end of 2012. The vehicle's MSRP is expected to be around $30,000, not including Federal and available state financial incentives.

The "i" also features a three-way battery charging system that allows the vehicle to be charged using the onboard household charger through either 110V or 220V power sources or by a quick-charger system that utilizes a three-phase 220V power supply. The charging times from a very low battery to completely full are approximately 8 hours at 220V and 16 hours at 110V. The three-phase 220V quick-charger can take a low battery all the way up to an 80-percent battery charge in under 30 minutes. The three-phase quick-charger makes use of a special outlet that is accessible on the driver's side of the vehicle, while the onboard household charger's outlet is located on the passenger side of the "i".
[PAGEBREAK]
Volkswagen Golf blue-e-motion 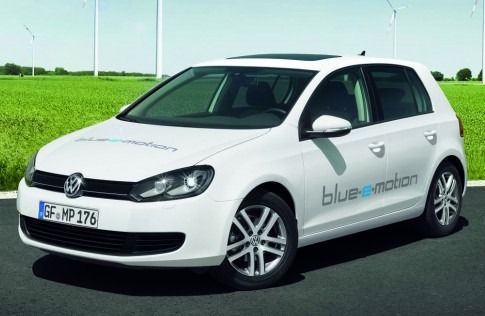 The five-door and five-seat Golf blue-e-motion is silently driven by an electric motor that delivers a high maximum torque (199 lbs.-ft.) from a stop. The electricity for powering the electric motor is stored in a lithium-ion battery with an energy capacity of 26.5 kilowatt-hours.
The Golf blue-e-motion features a driving range of up to 93 miles and offers ample power and features to preserve energy while driving. For example, the vehicle can coast or "sail," whenever the driver releases the electric pedal. The motor is then controlled to the zero-torque curve, allowing the car to coast down the road with the least possible drag. The Golf blue-e-motion also recovers kinetically generated energy through brake regeneration.

Consisting of 180 lithium-ion cells, the Golf blue-e-motion 30 battery modules can be found in the trunk floor, under the rear bench seat and between the front seats. A separate air-cooling system ensures a constant thermal environment in the battery compartment.

The Golf blue-e-motion upholds Volkswagen's Prevent and Preserve Safety System with 40 different standard features that all work together to help avoid accidents whenever possible and help protect occupants when an accident is unavoidable. These include six airbags, optimized front head restraints, front seatbelt pretensioners with load limiters, three-point safety belts in all five seating positions (two front and three rear) with emergency locking retractors and more.

Unique to the Golf blue-e-motion, all key primary and secondary drive components are integrated in the engine compartment at the front of the vehicle.

The Golf blue-e-motion is charged via a plug connector behind the folding VW logo on the radiator grille. A pictogram of a plug connector in the multifunction display indicates that the charging cable is correctly inserted and locked. During active charging an LED also flashes in the charge state indicator, and the charge level shown in the indicator is continually updated.
[PAGEBREAK]
Saab 9-3 ePower (Concept) 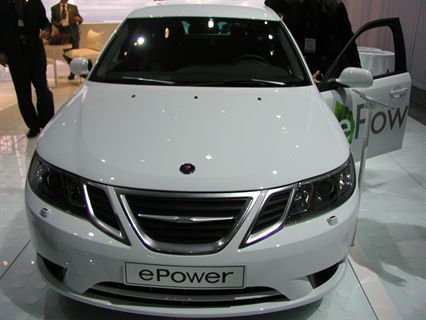 Saab debuted its first EV, the Saab 9-3 ePower. The 9-3 ePower serves as the prototype for a fleet of 70 all-electric test vehicles that will participate in extensive field trials in Sweden next year. It is a full-sized wagon with a projected driving range of approximately 200 kilometers that pushes the boundaries of current EV performance. 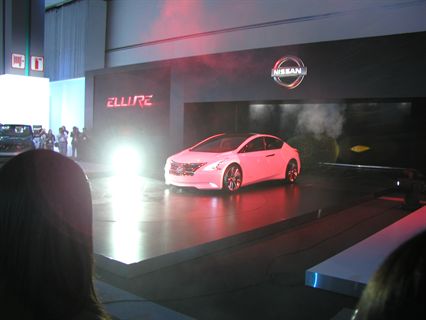 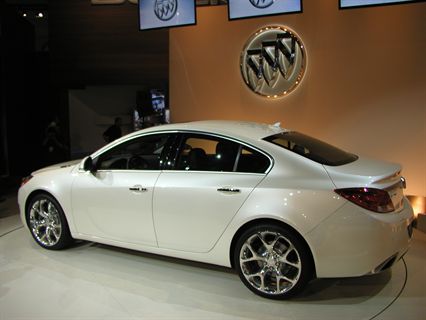 Additional show coverage and photo gallery will be available soon.

The national average gasoline price slid 2 cents to $2.59 for the week ending Aug. 26 and is expected to be the cheapest Labor Day average in three years, according to AAA.

Fleet drivers with a WEX Inc. fuel card will now be able to use their mobile device to pay for fuel at Shell stations, the company has announced.

Gasoline Spikes to $2.54 Per Gallon

The national average price of regular unleaded jumped 7 cents to $2.54 for the week, as a result of a recent trend that has been demand climb higher and supply fall, according to AAA.

FleetCor Technologies Inc.'s Comdata is offering an open-loop MasterCard to service fleets and other businesses that allows drivers to pay for fuel and other supplies, according to the company.