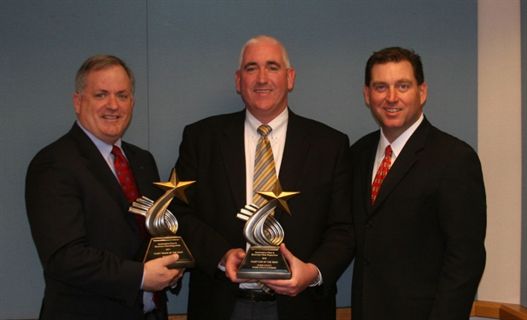 The Fleet Car and Truck of the Year awards began in 2003 as a way for AF to promote excellence in the fleet industry. Sponsored by Automotive Fleet and Business Fleet magazines, the award is given annually and voted on by fleet professionals. Qualified fleet professionals cast their votes online for one car and truck out of 74 cars and 13 light-duty truck nominees representing all of the major domestic and import-badged vehicles.

Last year's winners were the 2010-MY Chevrolet Malibu and Silverado.

The Ford Fusion all six-speed transmission lineup is available with two engine choices and a Hybrid model and Sport version.

New features for the Fusion/Fusion Hybrid this year include MyKey, available rain-sensing wipers, and HD radio. Integrated blind-spot mirrors have been added to cars without the optional Blind Spot Information System. Ford SYNC communications and infotainment system can now be integrated with the available touchscreen voice-activated navigation system.

To take both awards in the same year is an exciting accomplishment for Ford. "Winning Fleet Truck of the Year is really exciting for the entire Ford team," said John Ruppert, general manager, commercial and government operations for Ford Motor Company. "The F-150 has been an important tool for truck fleets for a long time and worthy of this recognition. More importantly, the 2011 model gets even better with an all new powertrain line up offering best in class horsepower, torque and fuel economy. Combined with industry leading quality, safety and technology, the value proposition for F-150 has never been stronger."

The vehicles will be featured in the upcoming December issue of Automotive Fleet, available soon.

Chevrolet Malibu Voted 2010-MY Fleet Car of the Year