FRANKLIN, TN - The new 2012 Infiniti M35h is not only the first-ever Infiniti Hybrid, it is the world's first hybrid to feature a standard audible pedestrian warning system, according to the manufacturer. The new Infiniti M Hybrid is set to go on sale at Infiniti retailers nationwide in early 2011, following its North American debut at the Los Angeles Auto Show in November.

With its advanced Infiniti Direct Response Hybrid system, which includes a unique 1-motor, 2-clutch, powertrain with compact Lithium-ion battery, the Infiniti M35h is capable of traveling faster and farther on electric-only mode than conventional hybrid designs. The new audible warning system, called Approaching Vehicle Sound for Pedestrians (VSP), uses a range of distinctive sounds to help ensure the safety of other road users. VSP automatically works from start-up to approximately 20 miles per hour, cutting back in at approximately 15 miles per hour as the vehicle slows.

The computer controlled system links an in-car sound synthesizer with a speaker built in to the front bumper. Instead of just a single tone, a range of high-low sounds at different volume levels was chosen after an extensive research program to find the most effective, but least intrusive, noise. The VSP development team worked with cognitive and acoustic psychologists studying areas including pedestrian behavioral patterns and noise pollution. The result is a sine-wave sound that extends from 2.5kHz at the high end to a low of 600Hz. It is a range readily audible to all age groups, while avoiding a sound range (around 1,000Hz) that would add unnecessary noise to the environment. 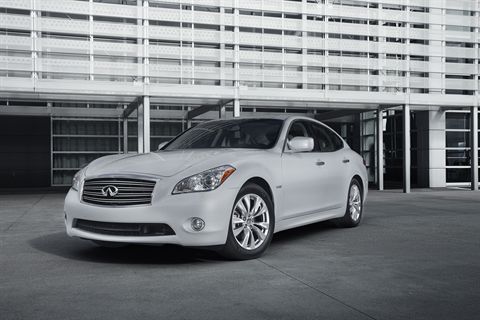 The noise sweeps from high to low frequency depending on vehicle speed and whether the Infiniti M35h is accelerating or decelerating. It is loudest at start-up to give a clear indication the vehicle is beginning to move off, while an intermittent tone is used when reversing - both sounds calculated to ensure the Infiniti M35h cannot surprise pedestrians and the visually impaired as it approaches.

Although the Infiniti M35h can travel at speeds of up to 62 miles per hour on engine noise-free electric power alone, road noise past approximately 20 miles per hour means the vehicle generates sufficient sound for the VSP to remain off. An extensive testing program during the hybrid's development showed that, in mixed driving conditions, the Infiniti M35h was able to drive in electric-only mode for as much as 50-percent of the time.