HERNDON, VA - For the fourth time in the past three years, an Audi model has won a prestigious EyesOn Design Award recognizing the best of automotive design displayed at the North American International Auto Show in Detroit.

This year the panel of judges recognized the redesigned Audi A6 as the "Best Production Vehicle" design displayed at the Detroit show, which ranks among the world's premier automotive exhibitions.

"This is strong feedback that we have done our homework," Achim Badstuebner, head of exterior design for AUDI AG, said in accepting the EyesOn Design trophy.

Audi has received four EyesOn Design Awards over the past three years. In 2010, EyesOn Design judges gave the same award to the new Audi A8 luxury flagship sedan, which went on sale in the U.S. in late November 2010. The production car design award went to the Audi R8 V10 in 2009 and that year's award for "Best Concept Vehicle" design went to the Audi Sportback Concept, which was shown in Detroit in 2009 and provided significant style cues to the sleek lines seen in the all-new Audi A7 due to arrive this Spring. 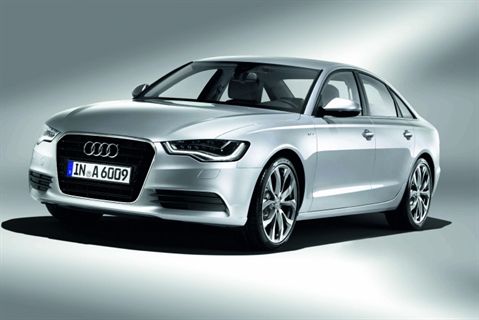 The design of the new Audi A6, which goes on sale in the U.S. this fall as a 2012 model, embodies athleticism and elegance. The sedan is 16.14 ft. long and 6.14 ft. wide, but just 4.79 ft. high - sporty proportions that are unrivaled by the competition. The long engine hood, the low, sweeping roofline and the prominent lines on the flanks create a dynamic overall appearance. Optional LED headlights emphasize the striking expression at the front.

The roomy interior of the new Audi A6 echoes the sinewy style of the exterior. The salient element is the "wrap-around" - an inlay encircling the driver and the front-seat passenger.

Every detail of the interior is a testament to the care that Audi invests in carmaking. All materials, including an innovative layered-wood veneer, have been selected and crafted with the utmost care. As an option, the front seats can be equipped with ventilation and massage functions. Classy ambient lighting in the lighting package provides small points of light throughout the interior.

Much of the body of the new Audi A6 consists of aluminum and high-tech steels, rendering it exceedingly light, stiff and safe. State-of-the art design methods and materials ensure extremely low interior noise levels.

Other finalists for the EyesOn Design Best Production Vehicle Award in 2011 were the Bentley Continental GT, BMW 6-Series Convertible, and Hyundai Veloster.

EyesOn Design at the North American International Auto Show is sponsored by the Detroit Institute of Ophthalmology (DIO) as part of the EyesOn Design series of events. The DIO is a not-for-profit that aids the visually impaired and facilitates research related to the eye. Each year, they host the EyesOn Design automotive exhibition at the Edsel and Eleanor Ford House in Grosse Pointe, Michigan that also focuses on design. The show is recognized by its peers as one of the best classic car shows in the country. The DIO enjoys a close relationship with automotive designers through the EyesOn Design events and by understanding the correlation between design and the eye.