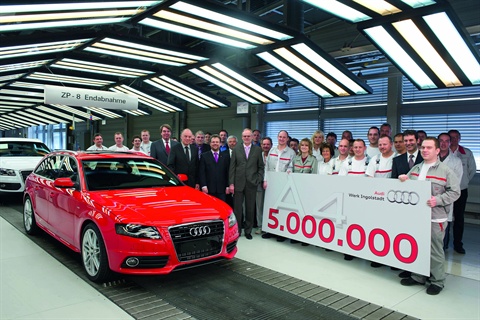 INGOLSTADT, GERMANY – The Audi plant in Ingolstadt produced its five-millionth Audi A4, an Audi A4 Avant 3.0 TDI Quattro. Audi began production of the A4 model line at its Ingolstadt site in 1994, and since 2007 has also been building it at Neckarsulm as part of the production turntable. Today, the A4 Sedan, A4 Avant, A4 allroad quattro, S4 Sedan and S4 Avant are manufactured in Ingolstadt; the A4 Sedan also leaves the assembly line in Neckarsulm.

“This is another major milestone in Audi’s history. All versions of the A4 are efficient, elegant and enjoy outstanding success in their class,” said Frank Dreves, Member of the Board of Management for Production at Audi AG. “Our highly motivated team and our effective Audi production system will keep this model on course for continued success in the future.”

Read more about Audi Audi A4