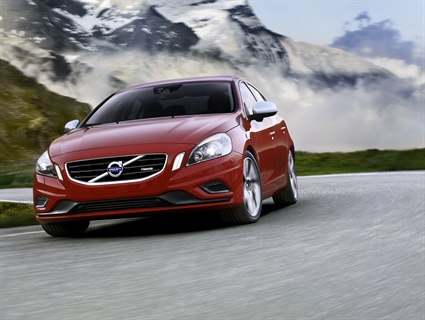 NEW YORK - The 2012 Volvo S60 R-Design sport sedan and XC60 R-Design crossover will get significant horsepower and torque increases when they go on sale late this summer, the company announced at the New York International Auto Show. The S60 R-Design will have a starting price of $42,275 and the XC60 R-Design will start at $43,150.

"The jump in performance will re-define these two R-Design models," said Doug Speck, president and CEO of Volvo Cars of North America. "Along with styling and suspension features that set them apart from other versions, our two newest R-Design models will have a higher 'fun-to-drive' quotient. I see that as a positive thing, and so will car buyers."

The S60 R-Design features the turbocharged 3.0L T6, what the company said is its most powerful six-cylinder engine currently offered. The company said the S60 R-Design achieves maximum torque from just 3,000 rpm and that it remains available throughout the rev range. Power is transmitted to the wheels via Volvo's second-generation six-speed automatic Geartronic transmission with sport mode. New valves and lower friction mean faster gear changes than before.

After developing the all-new S60, the company said its chassis team focused on further refining a number of details.

"The challenge was to boost the dynamics without making the chassis feel raw," says Stefan Sallqvist, manager of vehicle dynamics. The chassis team fitted a strut brace under the hood that ties together the suspension strut towers to stiffen the body structure and improve steering response. At the rear, the S60 R-Design features monotube dampers. Unlike the twin-tube dampers used in the S60 T6, the monotube system features compression and return damping via the same valve. This gives shorter, faster fluid flow, which in turn means the damper responds more quickly.

The front and rear springs have been shortened by 15 mm and spring stiffness is 15 percent higher compared to the chassis in the S60 T6. The bushings with which the rear dampers are attached to the body are 20 percent stiffer compared with the Dynamic chassis found in the standard S60 T6. The front tie-blade bushing, the attachment in the rear of the car, is 400-percent stiffer than before to counteract wheel bouncing and shaking.

Similar to the S60 T6, the S60 R-Design will be offered standard with Volvo's electronically controlled all-wheel-drive system with Instant Traction and Corner Traction Control with torque vectoring. 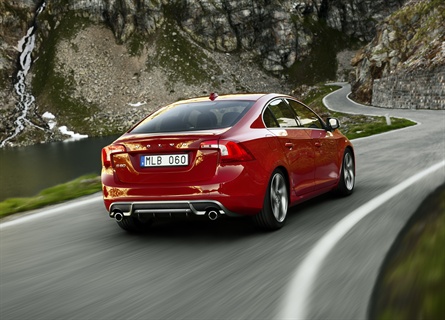 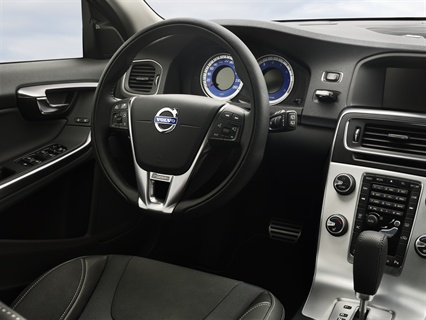 The driver and front passenger sit in sports seats where the backrest from the S60 is matched by an all-new seat cushion with deeper side bolsters. The upholstery will be offered in off-black leather with contrasting stitching and a sport-oriented textured leather accent with an embossed R-Design logo across the front-seat backrests. The interior also features a sport steering wheel with R-Design logo, gear selector, sports pedals, floor mats, and a blue watch-dial instrument cluster.

Safety features for the S60 R-Design include available Pedestrian Detection with Full Auto Brake. This driver assistance system consists of a newly developed radar unit integrated into the S60's grille, a camera fitted in front of the inside rearview mirror and a central control unit. The radar can detect any object in front of the car and to determine the distance to it while the camera determines the type of object. Up to 22 mph, the system helps the car avoid hitting a pedestrian. At higher speeds, the system helps mitigate the severity of an impact.

The function is also programmed to respond to vehicles in front of the S60 R-Design at a standstill or moving in the same direction as the car equipped with the system. The dual-mode radar’s wider field of vision allows early detection of pedestrians about to step into the road in front of the vehicle. The camera has higher resolution than the previous-generation unit, making it possible to detect a pedestrian’s movement pattern.