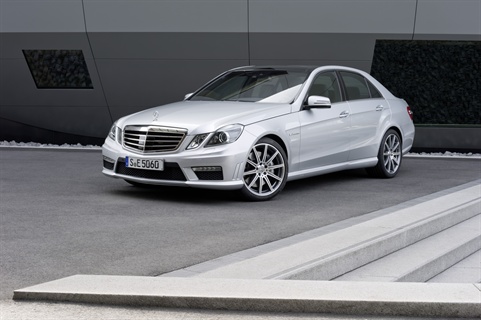 NEW YORK – Mercedes showed its 2012-MY E63 AMG at the New York International Auto Show. Designed for high performance, the E63 features improved handling, new driver assistance systems, an upgraded interior, and a more aggressive exterior appearance, according to the company. The 2012MY E63 AMG goes on-sale in the U.S. this fall. 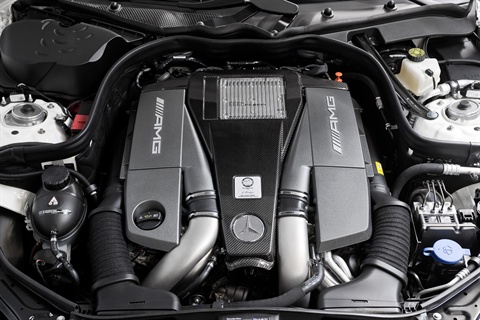 The company said that this model's new high-performance engine provides a 22-percent increase in fuel economy, based on the European driving cycle.

The company said its newly developed electromechanical AMG speed-sensitive sports steering system, which only draws power during steering wheel movements, also improves fuel economy. Mercedes has not yet released mpg numbers for this vehicle. The improvements in output and torque that come with the AMG Performance Package can be attributed primarily to an increase in the maximum boost pressure from 14.5 to 18.8 psi, according to the company.

The AMG SPEEDSHIFT MCT 7-speed sports transmission uses a compact wet start-up clutch. The 2012 E63 AMG also features the company’s ECO Stop/Start function, which is active when the vehicle is in the Controlled Efficiency ("C") transmission mode. It switches the eight-cylinder engine off when the vehicle stops. The driver can activate or deactivate the ECO Stop/Start function using the ECO button on the center console. When in transmission mode "C", the vehicle will always start-off in second gear. The system will also shift earlier and avoid high engine speeds. Other fuel economy-improving technologies include a demand-driven fuel pump and generator that use braking energy during deceleration.

Other performance modes include "S" (Sport), "S+" (Sport plus), and "M" (Manual). In all three transmission modes, not only is the ECO Stop/Start system deactivated but the engine management system partially suppresses the cylinders at full load. This managed interruption to ignition and injection results in faster gear changes, aided by automatic rev-matching during shifts, according to Mercedes.

The exterior design features new light-alloy wheels and the "V8 BITURBO" lettering wider front fenders. Other details include AMG body styling with a specific design for the front and rear along with AMG rocker panels, and an AMG sports exhaust system with two chrome-plated twin tailpipes.

The 2012 E63 AMG features the AMG RIDE CONTROL sports suspension with a specially designed front axle. Other features include steel suspension struts on the front axle and air suspension struts on the rear axle, with an automatic level control system and an electronically controlled damping system, which automatically adjusts the damping characteristics depending on driving conditions and reduces body roll. The driver can switch to a different suspension mode, "Comfort", "Sport," and "Sport plus" with a button press. The 2012 E63 AMG also features a new electromechanical AMG speed sensitive sports steering system. 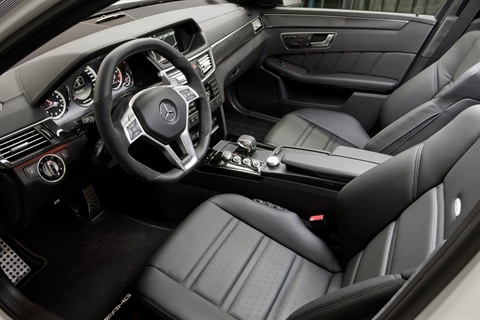 Inside, the AMG Performance steering wheel has a three-spoke design. The rim of this wheel, as in the 2012 CLS63 AMG, is flattened at both top and bottom to facilitate even better control of the vehicle. Aluminum shift paddles, the perforated leather in the grip areas, and the three-dimensional design of the airbag cover with its "Silver Shadow" metallic trim element complement the new E-SELECT shift lever with embossed AMG badge. Like the CLS63 AMG, the instrument cluster of the 2012 E63 AMG features a three-dimensional full-color TFT display in the center of the speedometer.

Driver assistance systems in the 2012 E63 AMG include Active Blind Spot Assist and Active Lane Keeping Assist. Active Blind Spot Assist warns the driver if the short-range radar sensors detect a potential collision should the vehicle change lanes. It intervenes if the driver ignores the warnings by applying braking force to the rear wheel on the opposite side of the vehicle, controlled through Mercedes’ 3-stage ESP system

Mercedes’ Active Lane Keeping Assist is linked to the 3-stage ESP. It activates when the driver drifts over a solid line to the right or left of a lane. When this happens, Active Lane Keeping Assist brakes the opposite rear wheel and prevents the vehicle from crossing the line. A display on the instrument cluster warns the driver at the same time. If broken lane markings are crossed, the system controls an electric pulse generator in the steering wheel which generates vibrations for a short time. Before the braking system intervenes, the steering wheel vibrates to warn the driver.

In addition to the 3-stage ESP system with Sport mode, the E63 AMG features the AMG high-performance braking system with two-piece discs at the front.