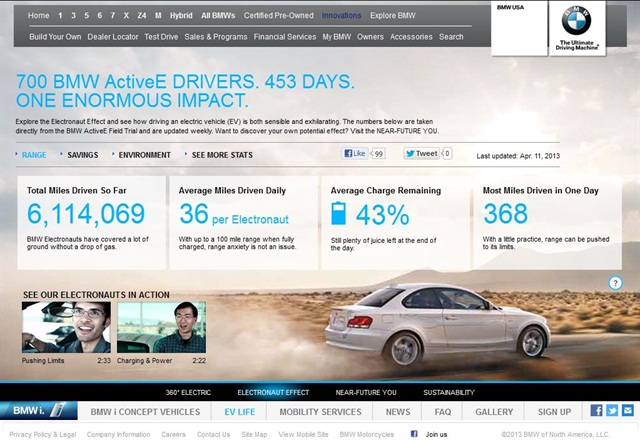 The Electronaut Effect (www.bmwusa.com/ElectronautEffect) aggregates date from the 700 BMW ActiveEs participating in the ActiveE Field Trial, which began in January 2012. The online tool presents data on vehicle range, for example, the largest number of miles driven in a single day; savings, and the effect on the environment, for example the number of gallons of gasoline the vehicle avoided using.

Some of the stats from the online tool show that as of April 11, 2013, BMW’s “Electronauts” have driven 6.1 million miles. The most miles driven in a single day was 367.7. The 700 drivers participating in the Field Trial have already saved more than $740,000 in gasoline costs, which is more than 275,000 gallons of gasoline, BMW stated.

For the actual Electronauts themselves, BMW said they have access to a site at www.BMWActivateTheFuture.com that provides them with more in-depth data about their ActiveE and the entire fleet of 700 vehicles. Data drivers in the program can access include the average number of times he or she charges their ActiveE each day, the average amount of charge remaining at the end of the day, and how driving the vehicle help reduce their carbon footprint. Drivers in the program can also see their rank in the program and compare statistics with one another.

Those who aren’t participating in the Field Trial who visit the www.BMWActivateTheFuture.com site can view an aggregate version of data from the program.