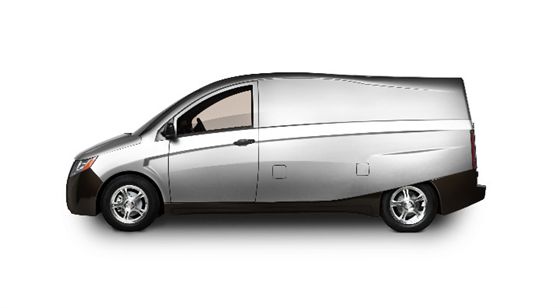 DETROIT and ANDERSON, IN - Bright Automotive and General Motors Co. announced Aug. 3 they have agreed to pursue a strategic relationship and that GM has provided $5 million in funding to the Indiana automaker, the first funding action by the newly formed General Motors Ventures LLC.

The funding will help accelerate Bright's production of the IDEA, a revolutionary plug-in hybrid commercial vehicle. The financial crisis of 2008 delayed the vehicle, originally intended to reach the market by 2012, according to Reuben Munger, Bright Automotive chairman and CEO, during a media conference call. Munger now anticipates the vehicle to be launched within the next four years.

"The vehicle is a commercial fleet vehicle, targeted at Class 1 and 2 users," said Munger, citing fleets such as cable telecommunications, utility services, service industries, and beverage companies. "The customers will continue to be an important partner in developing the vehicle as we go forward," he said.

In North America, Munger said the companies plan to produce approximately 900,000 units. Though pricing was not disclosed, Munger said the vehicle will save fleet customers 10-15 percent in total cost of ownership.

"Our exclusive focus on the commercial market allows us to explore some very unique opportunities to really meet the needs of these customers who care most about getting the vehicle delivered and upfitted in the most economical way as possible. We are evaluating a number of channels to provide those to our fleet customers," said Michael Brylawski, Bright Automotive executive vice president.

The companies signed a memorandum of understanding in July. GM Ventures provided funding of $5 million to Bright, and the two companies intend to complete the formal agreements later this year.  Upon completion of the agreements and other terms, General Motors Ventures would have a minority stake in Bright Automotive and Bright would have access to GM technologies, and advanced engine and transmission systems, for its vehicle.

Jon Lauckner, president of GM Ventures, said distribution to GM dealers has not yet been decided. "The mainstream assumption is that Bright will most likely handle the distribution," said Lauckner. "Beyond that, it is really too early to say exactly what if any role we'd have in distribution."

The IDEA operates in electric mode for 40 miles before switching to an estimated 36-mpg hybrid mode for 100+ mpg potential based on daily driving behavior. Lightweighting and advanced aerodynamics will help in maximizing the vehicle's fuel economy, according to Brylawski.

Funding through GM Ventures will allow Bright to begin ramping up the development of the production program for the IDEA in the third quarter of 2010.  Bright continues to seek a low-interest loan through the Department of Energy's ATVM program.

Lauckner said GM is still trying to figure out where the new vehicle will fit in its portfolio.